Where they come from and how to get rid of them

Everything you need to know about mushrooms in lawns and turf

Welcome to another entry in our new blog. This guide was created by Danny Woodley, a keen amateur gardener who loves tending to his garden and looking after his neat lawn.

Have you noticed mushrooms growing in your lawn or new turf?

Are you concerned they could be a sign of a severe lawn issue?

Want to know how to get rid of lawn mushrooms?

Read our guide to everything you need to know about mushrooms in lawns – by DIY Gardening.

Why Do Mushrooms Grow in Lawns?

Mushrooms produce spores that spread all over our gardens and can be found in almost every crevice. Given the right conditions, these spores will germinate and develop into mycelium.

Just as plants have roots, mushrooms have mycelium.

Under the surface soil in most gardens, you’ll find an entire network of this mycelium which consumes nutrients that allow it to spread.

Given the right conditions, the mycelium will produce a mushroom, which sprouts through the surface which then goes on to releases spores.

Thus, the purpose of a mushroom is to reproduce.

Mushrooms in Lawns are a Good Sign (Most of the Time)

Many gardeners become concerned when they see lawn mushrooms; they worry that there’s something wrong with their lawn and have questions such as:

The fact of the matter is that for the vast majority of gardeners, mushrooms in lawns isn’t an issue and is a sign that they have grown a healthy lawn.

Mycelium loves nutrient-rich soil and will grow like crazy in a healthy, well-aerated and well-watered lawn. It struggles to grow in poor, compacted soil.

You shouldn’t worry if:

How to Get Rid of Lawn Mushrooms

We do not recommend any form of fungicide as it will likely damage the lawn, possibly runoff into the surrounding areas and at the least will kill the mycelium that is a perfectly normal and natural part of a healthy garden.

Neither do we recommend vinegar or any “natural” lawn mushroom killer.

Mycelium is a complex yet crucial part of the ecosystem, and any chemical that kills it will have adverse effects on the garden, so should be avoided. While some mycelium will form mushrooms, most don’t, yet they are all part of a healthy garden ecosystem as they help to recycle nutrients and make them available to other organisms in the garden (source).

To get rid of lawn mushrooms, you do have a couple of options, and neither involves using chemicals:

While it’s perfectly normal to see lawn mushrooms in autumn and when the conditions are just right, you can take some preventative steps if you see an excessive number of mushrooms and you think it’s unusual:

Mushrooms growing in the first autumn after we sowed grass in our shaded garden.

Why Do Mushrooms Grow in New Turf?

You might be surprised to know that mushrooms often grow in newly laid turf, it’s incredibly common.

Secondly, do consider that most gardeners will water their new turf daily until the roots have struck into the ground. This excess water is perfect for mushroom growth, as is any feed or fertiliser that was put into the ground before the gardener laid the turf.

One final point on turf mushrooms: As stated at the beginning of this guide, every lawn contains mushroom spores, it’s normal. The process of excavating turf, transporting it and laying it in a new location on freshly disturbed soil will release spores from the turf and the soil in the garden.

After a spore germinates, it will grow into mycelium, and a mushroom can appear in as little as two weeks if the growing conditions are right.

In a nutshell – it’s perfectly normal to see mushrooms growing in turf; the spores from the turf and your garden plus the watering is what caused them.

A Warning About Fairy Rings

The vast majority of mycelium is healthy for your garden and your lawn, however, a few species are destructive and can damage the lawn and poison the soil.

If you see mushrooms in lawns growing in a circle, they will likely be caused by fairy ring fungi: 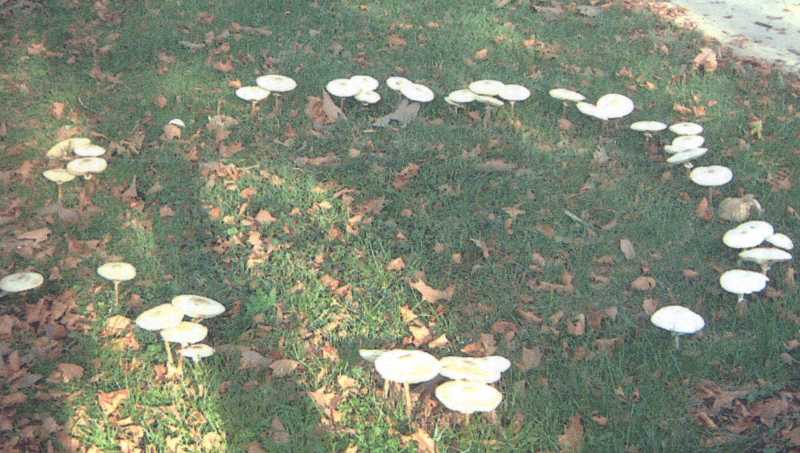 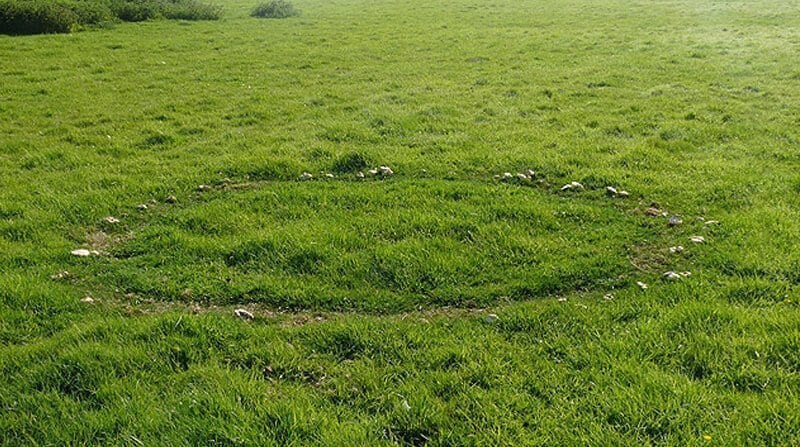 Image from Garden Seeker. Read their excellent and in-depth tips on getting rid of lawn fairy rings.

Fairy ring fungi are destructive and will discolour the lawn grass within the circle and can even kill it. The fungi are persistent and very difficult to remove; you may need to excavate the turf and soil underneath to get rid of the fungi.

For more information on fairy ring fungi, explore the pages suggested above.

For the vast majority of gardeners, lawn mushrooms are not something they should be worried about. Mushrooms thrive in good quality, healthy soil that’s perfect for grass.

They also love freshly laid turf and all the water that gardeners use to encourage rooting.

Mushrooms will go away on their own when the conditions change, but you can get rid of them by mowing more frequently, raking the lawn or putting on some gloves and picking them up.

You might be able to reduce the number of mushrooms forming by resolving existing issues with lawn drainage, over-watering or poor light. Chemical treatments should be avoided as the mycelium is a crucial part of the garden ecosystem.

Fairy rings are a different beast as it’s challenging to kill this damaging fungus. You may need to excavate the grass circle to get rid of it.

This guide to lawn mushrooms is posted on our blog but also features in our lawn care guide.

This guide to lawn mushrooms is part of our blog. Explore more great gardening guides by DIY Gardening. Start Here

Discover all of our lawn care guides here at DIY Gardening. Learn how to create and maintain a lush, healthy green lawn. Start Here

Learn how to deter common garden pests including slugs, mosquitoes, wasps and even cats and squirrels. Get started with our guide. Start Here

4)  How to Remove Lawn Moss

Is your garden lawn infested with moss? It’s easy to remove lawn moss and stop it growing back, just follow our step-by-step guide. Start Here

5) The Best Grass Seed For the UK Climate

Choose the right lawn seed for the UK climate and you’ll have a lush, green lawn all year round. Start Here

We’ve tested the best lawn weed killer and firmly believe you should try these two products, one in the spring and the other in the autumn. Start Here