A complete guide to getting rid of this destructive lawn pest

Everything you need to know about lawn leatherjackets

Welcome to another entry in our garden pest control guide. This guide was created by Danny Woodley, a keen amateur gardener who loves tending to his garden and looking after his neat lawn.

Leatherjackets can be a very destructive lawn pest, and large infestations have been known to destroy grassy lawns, not only do they turn the grass brown but can completely kill it off too.

But what are leatherjackets? Where do they come from, and what’s their lifecycle? What damage can they do and how they can be killed or deterred?

Welcome to DIY Gardening’s guide to leatherjackets – explore ways to kill and deter this destructive lawn pest without using harsh chemicals or breaking the bank.

Leatherjackets are the larvae of well-known insect called a crane fly, you’ve almost certainly seen these clumsy insects in or around your home and you’ve probably heard them being called Daddy longlegs. They are most commonly found in late summer or autumn and are sometimes mistaken for spiders.

Daddy longlegs are part of the Tipulidae family of insects and can be found worldwide.

The leatherjacket is the grub or larvae formed from mating daddy longlegs.

Daddy longlegs are active from late summer into autumn when males and females will mate.

After mating the female will lay eggs, typically under grassy areas of the garden.

Within a couple of weeks, grubs, known as leatherjackets, will hatch and burrow deeper into the undergrowth.

Initially devouring roots and even coming up to the surface to eat grass blades, the leatherjackets will then burrow deeper into the ground during the winter to avoid the frosts and cold weather.

Leatherjackets aren’t very active during the winter so even if you can’t see them, you shouldn’t assume they aren’t there.

In spring, when the ground temperatures rise, they will reappear and start consuming the grass roots and some top growth.

Once the leatherjacket has consumed enough nutrients and grown to a suitable size, it will pupate – this is the final stage of the lifecycle prior to the grub transforming into a daddy-longlegs.

Daddy-longlegs have a very short lifecycle; unfortunately, it’s just enough for them to find a mate and start the lifecycle all over again – by laying eggs in the lawn.

Here is a brief timeline:

How to Tell if Your Lawn is Infested With Leatherjackets


There are several grubs that can damage lawns, and one should not automatically assume that it’s leatherjackets.

Fortunately, there is an easy way to tell if you have a problem with leatherjackets.

First, find an area of the lawn that looks damaged, an unusual bare or brown patch, for example. Now do a classic pull test; healthy grass will have strong roots and won’t be easy to pull up. Diseased or damaged grass will have weak roots that will give way easily.

Assuming the grass pulled up easily, it’s now time to dig up a section of the lawn and undersoil.

Here’s how you tell the difference between the grubs you may find: 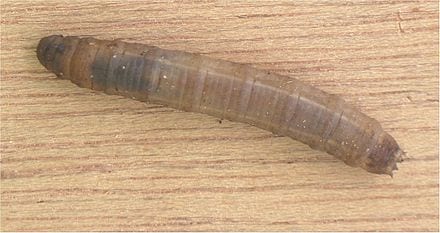 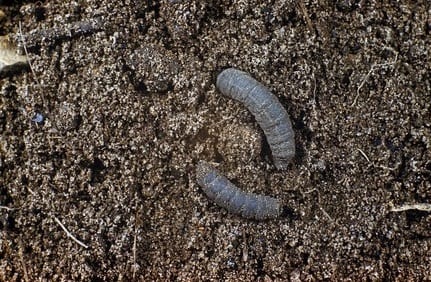 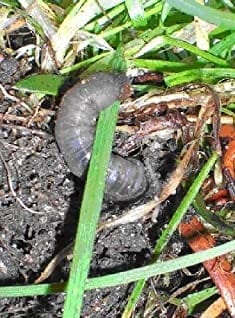 How Much Damage Can Leatherjackets Do To a Lawn?

A handful of leatherjackets is unlikely to do too much damage, and you probably won’t even notice them.

However, a larger infestation can be devastating: 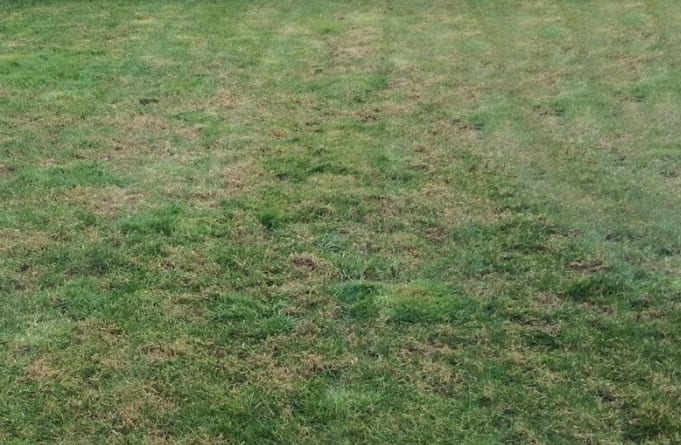 Leatherjackets will consume the roots and during nighttime, they often surface to consume the grass blades as well.

If the infestation is large enough, badgers and foxes will tear up the grass as they search for the grubs.

Large birds will also pull up the grass to reach the leatherjackets. With the grass already weakened, bird, fox and badger damage can be extreme.

The leatherjacket grubs may be more active during a milder, wetter winter so the damage could be light one year and extensive the next.

How to Get Rid of Lawn Leatherjackets

As their name suggests, leatherjackets are tough little pests, and there is no known chemical treatment for them. Well, none that guarantee success without ultimately polluting the garden with poison.

You do have a few options to try though:

There are many different types of nematodes but the variant sold by Nemasys attack and kill off leatherjackets without harming your grass, plants, other insects, pets or children.

Nematodes are alive and need to be kept in a fridge, so you should only purchase them at the correct time of year. You cannot store nematodes for long, and they should ideally be deployed as soon as they arrive.

Each pack of Nemasys contains up to 50million nematodes. Just add them to water and water the lawn, you’ll need to keep the lawn well-watered so the nematodes can flourish and seek out the leatherjackets.

The best time to apply the nematodes is between late August and the end of October. For effective treatment of a large infestation, you may need to use more than one dose.

You can apply them in the spring, but the leatherjackets will be hardened and less likely to succumb to the nematodes. Spring applications should be done at double the normal dose and only applied when the temperature is above 12°C. 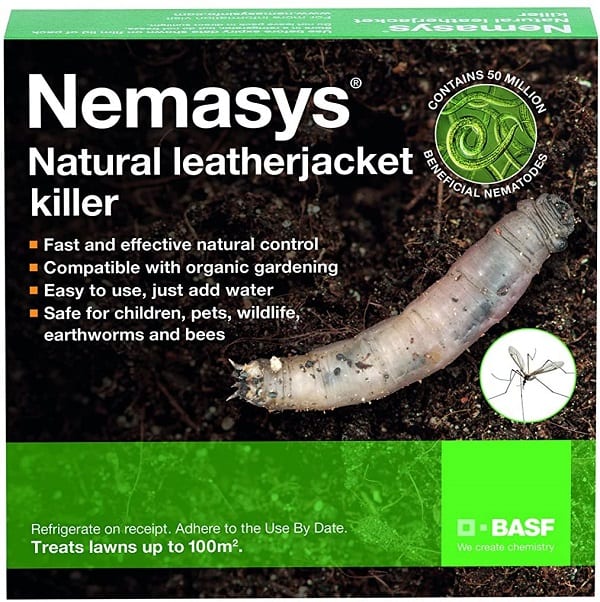 In late summer and early autumn, you may notice lots of daddy longlegs in your garden. Your goal is to prevent them from mating and laying eggs.

You can achieve this by mowing more regularly, collecting any grass cuttings in your mower and raking the lawn more frequently and more aggressively.

The eggs are more likely to hatch if the lawn is kept moist so also avoid watering the lawn at this time of year. If you can keep the lawn as dry as possible, few if any of the eggs will survive, of course, this isn’t always practical as gardeners often sow grass seed in the autumn and none of us can control the weather.

Fortunately, daddy longlegs don’t live for very long as their only aim is to mate, so you only need to take these steps for a few weeks at most.

The goal of this method is to encourage the leatherjackets to the surface where you can then pick them up yourself, set the mower height to its lowest and mow them to death or leave them for birds to consume.

First, pick a time of year when the leatherjackets are active and then water the lawn and give it a good soaking.

Then lay a dark tarpaulin or dark plastic cover over an infected section of the lawn. You’ll need to peg it down to stop the wind lifting it.

You’ll need to leave it covered overnight and possibly for a day too. The tarp will create a warm, moist, dark environment that will encourage the leatherjackets to the surface.

Lift the tarp in the morning, and you should see them on the surface. For small gardens, you should be able to pick most of them up.

Now move the tarp to another part of the garden and repeat the process.

The tarp method won’t kill all of the leatherjackets but is a cheap way to control their numbers, so they don’t ruin the lawn.

Every garden pest will have natural predators, and the leatherjacket is one of the tastiest meals a bird can find.

By encouraging more birds into your garden, you’ll be a step closer to getting leatherjacket numbers down to an acceptable level.

This method works particularly well with option 3 (the tarp method) as the birds will eat the grubs while they’re on the surface of the lawn.

There are many ways to encourage birds into the garden:

It can take a while for birds to get used to your regular feeding, but once they do, they will come back every day to feed and should pick off some the leatherjacket grubs.

Leatherjackets are a destructive garden pest that can wreak havoc to lawns by devouring roots and top growth; they also attract large predators such as badgers and foxes that will damage the lawn further by digging.

Leatherjacket numbers can fluctuate from year to year depending on how many eggs survive the autumn and the weather conditions in winter. Wet autumns and mild winters can lead to an explosion of leatherjackets. You shouldn’t assume the infestation is under control just because you’ve seen a reduction in the number of grubs one year, ongoing treatment is usually required, often for several years.

While there aren’t any chemical solutions available, you can use nematodes and also introduce natural predators to your garden.

For a quick fix, use the tarp method on one section of your lawn at a time and periodically pick up the surfaced leatherjackets.

Reduce your watering regimen during the autumn, mow the lawn frequently and collect grass cuttings.

This guide to killing lawn leatherjackets is posted in our garden pest control guide and also features in our lawn care guide.

Our new blog contains tons of great resources for the budding gardener. From how to get rid of lawn mushrooms to propagating tips and much more. Explore more great gardening guides by DIY Gardening. Start Here

Discover all of our lawn care guides here at DIY Gardening. Learn how to create and maintain a lush, healthy green lawn here in the UK. Start Here

Learn how to deter common UK garden pests including slugs, mosquitoes, wasps and even cats and squirrels. Get started now with our free guides. Start Here