A Cheap Hammock For All Occasions

“I’ve been using this hammock for over a year”

In July 2021, I purchased my first and only hammock and despite buying one of the cheapest hammocks I could find, I’m delighted with it and have used it dozens of times in the garden and on about half a dozen camping trips as well.

Is this the best hammock in the world?

No, it’s not. Some hammocks cost many hundreds of pounds, but considering this one is currently on sale for less than £70 (July 2022 prices), I think it’s excellent value.

If you’re looking for a cheap hammock with a stand, consider this one.

The hammock I have is still available from Amazon and has over 450 reviews, go check them out here

Or keep reading to find out why I think this product is the best of the bunch at this price range.

What’s in the Bag

This cheap hammock comes with:

Photos of This Hammock

Here are some photos of the hammock and stand: 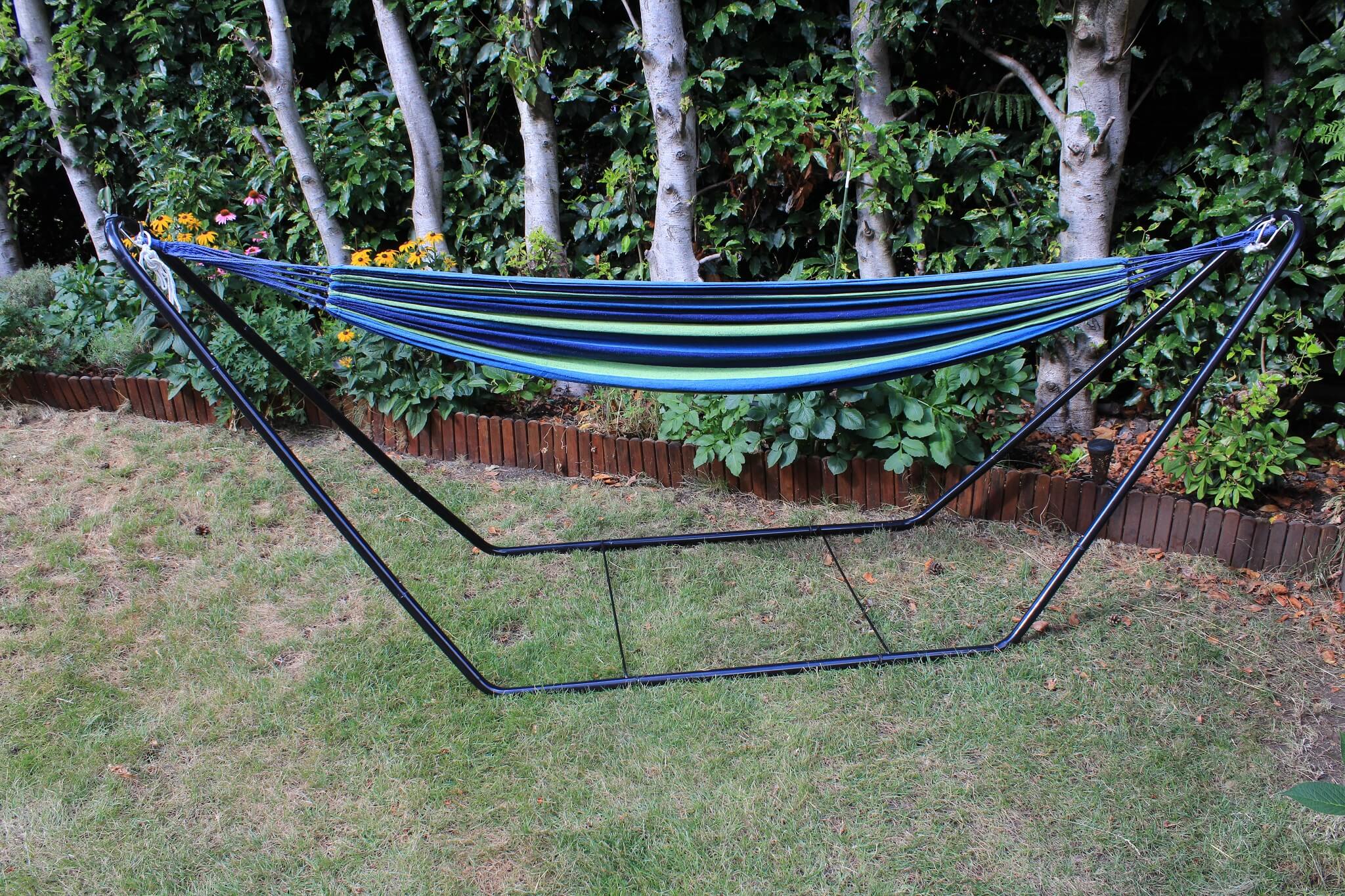 The frame is basic but it does the job. 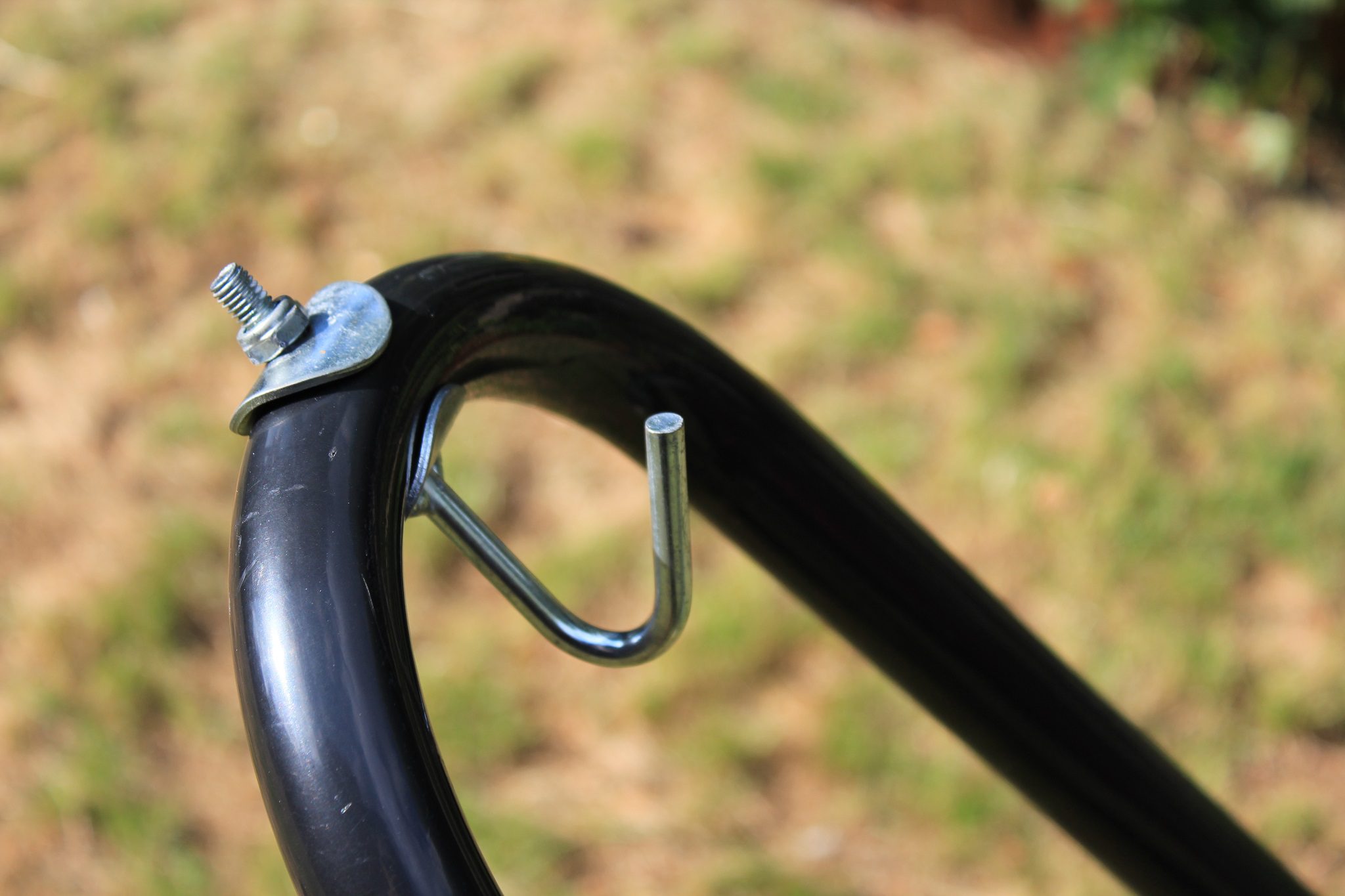 The hook holding the hammock is strong and sturdy if unattractive. 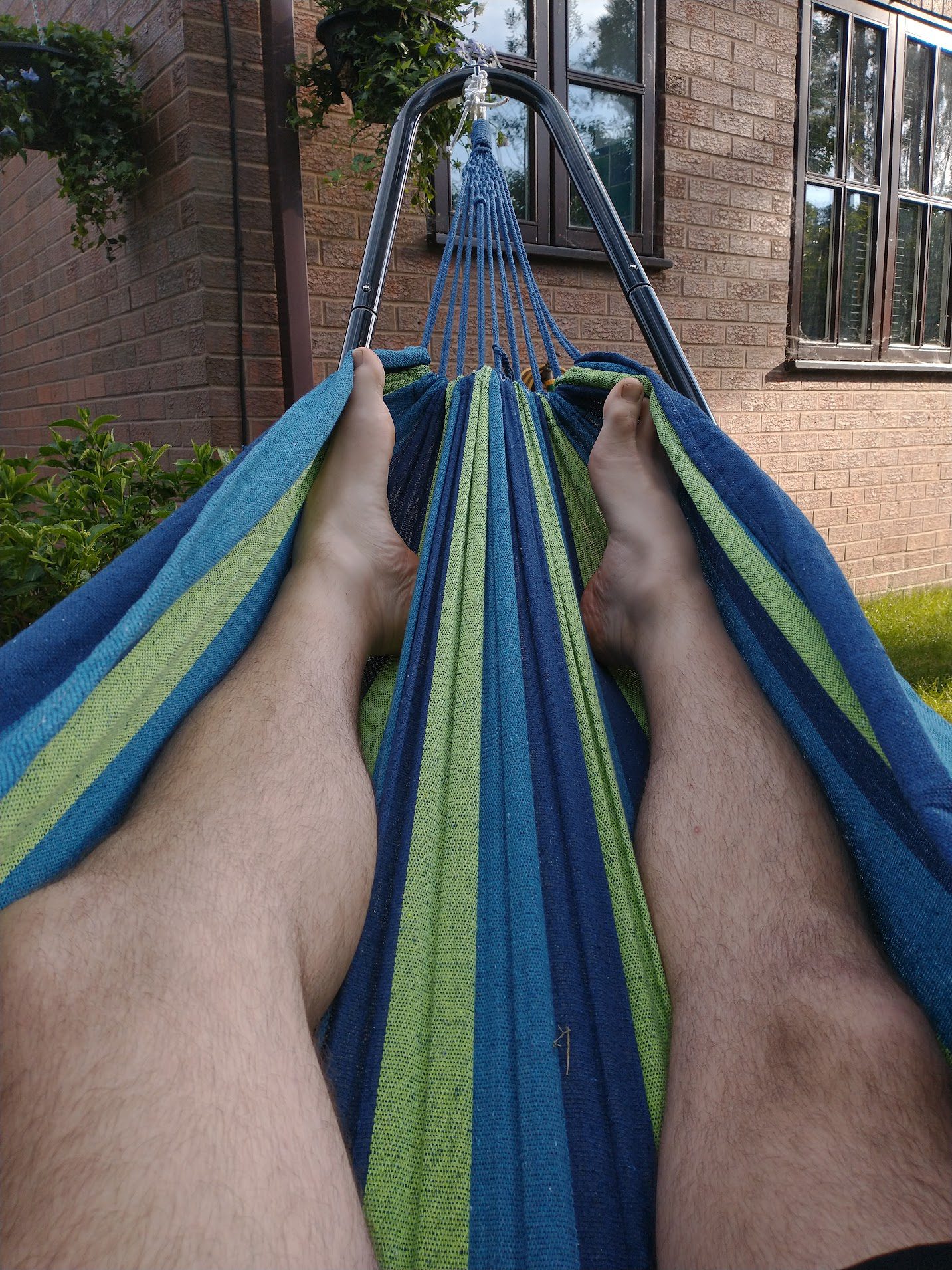 I’m 6ft2 and just about fit into the hammock. 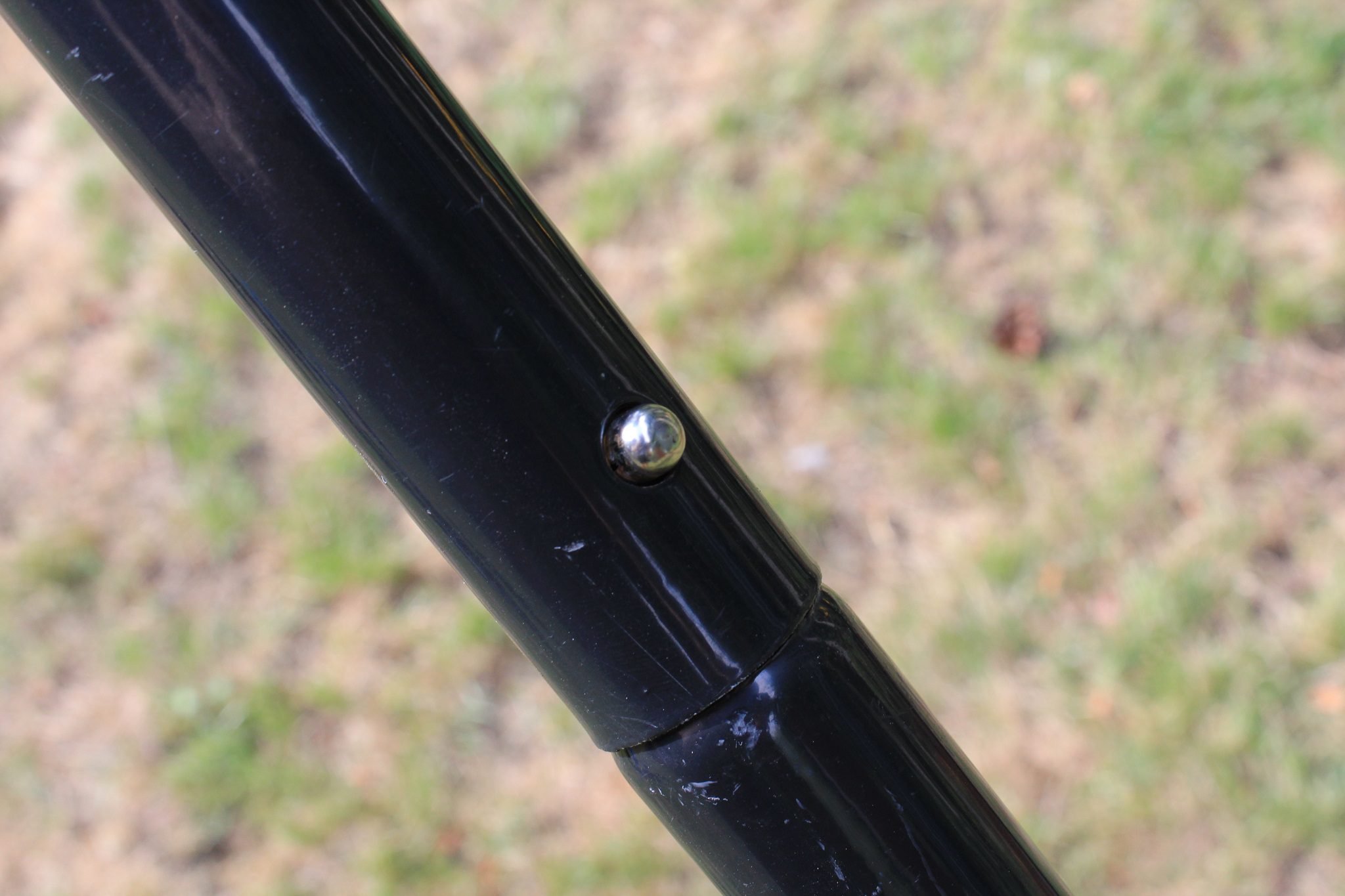 You don’t need any tools to assemble or take apart this hammock. 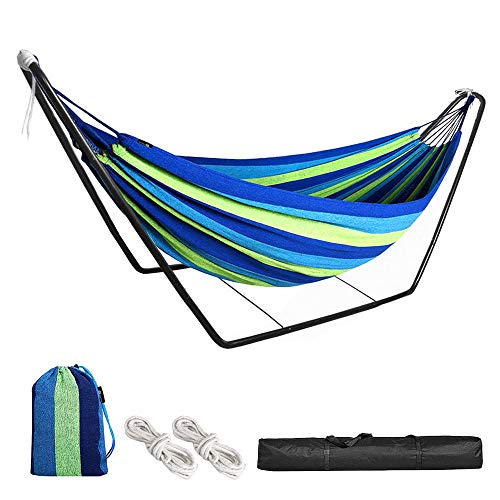 Affordable Hammock With Stand
An affordable basic but quality hammock for any occasion; in the garden, camping and more. Comfortable but durable fabric with a choice of colours. Black metal frame. Easy for one person to assemble - only 12 poles. Weighs 10kg. Comes with carry bag. Tested by Daniel at DIY Gardening
£68.98
Buy on Amazon

Assembling the Hammock and Stand

Assembling the hammock couldn’t be easier; the tubes slide together and are held in place by two bars at the base of the hammock.

With only 12 tubular pieces to fit together, it didn’t take me long to figure out how to assemble it.

As I’ve used the hammock dozens of times, I can now assemble it in less than 3 minutes and taking it apart is even easier.

The hammock is made from cotton, is striped and comes in various colours. It’s held in place by the sturdy metal hooks at each end of the stand and I’ve never felt unsafe in this hammock, despite my being on the heavier side.

I’ve found that to ensure stability, it’s best to place the hammock stand on a flat surface although I’ve used it a few times on a slight slope and it was fine.

As this hammock doesn’t have a spreader bar, it wraps the user in a cocoon.

Some people prefer hammocks with a spreader bar, but there are pros and cons. For example, a side sleeper may find a spreader bar hammock more comfortable, but generally, they are less stable than a cocoon-style hammock.

Cocoon hammocks may obstruct the view and tend to sag more, but you’re less likely to fall out of one.

Despite being 6ft2 and overweight, I give this hammock a 9/10 comfort rating.

If you’re taller than me, you may want to look into buying a larger hammock, perhaps even a 2-person hammock.

The tubes on this hammock are coated to prevent rust, and after 13 months of sporadic usage, my hammock is showing no signs of rust at all.

The hammock can be used without the stand, although you’ll need to buy some sturdy rope to attach it to a tree or other solid object.

I’ve tied this hammock to trees, walls and even a balcony railing without any issues, but obviously, you’ll want to make sure whatever you connect it to is strong enough to hold your weight.

I’ve washed the hammock a couple of times and it’s survived the washing cycle without any issues or colour loss.

The weight limit of this hammock and stand is 330lbs (150kg/23.5st), making it suitable for one adult or two smaller persons.

Now comes my two issues with this hammock:

1) Stability – while the stand is stable when I’m on it, it tilts when I try to get in or out, this is an inherent problem with all lightweight hammocks such as this. There isn’t enough weight to secure the hammock to the ground. If the stand weighed more, it would be more secure but wouldn’t be as portable. It would be nice if it came with clamps I could press into the ground to peg it but unfortunately, it doesn’t.

I found it easier getting into the hammock by placing one leg on each side and sitting down and back slowly. To get out, I again placed a foot on either side and eased myself up. Gaining access from one side could cause it to tilt.

2) Aesthetics – Let’s face it, this isn’t the most attractive hammock, far from it. I chose this hammock because it was cheap, had a sturdy frame and was portable so I could take it camping and use it in the garden. At this price range, something had to give, and that was the aesthetics.

How Other Customers Rate This Cheap Hammock With Stand

A close friend has owned an identical hammock for several years without any issues and online I found hundreds of reviews of this product:

Looking into the negative reviews I found that most were due to damage in transit. There were several mentions of scratches and dents.

The hammock I received fitted the stand perfectly with about 40cm of space between it and the ground (when I’m sitting in it) but others have reported that their hammocks are of different sizes and either sag close to the ground or are too taught and therefore too high.

Many of the positive reviews mentioned the value for money, comfort and how easy it was to take away on trips.

If you’re looking for a hammock with stand at the lower end of the price range but also want one that’s sturdy and portable, consider this alternative:

This was my second choice cheap hammock.

The key points are: 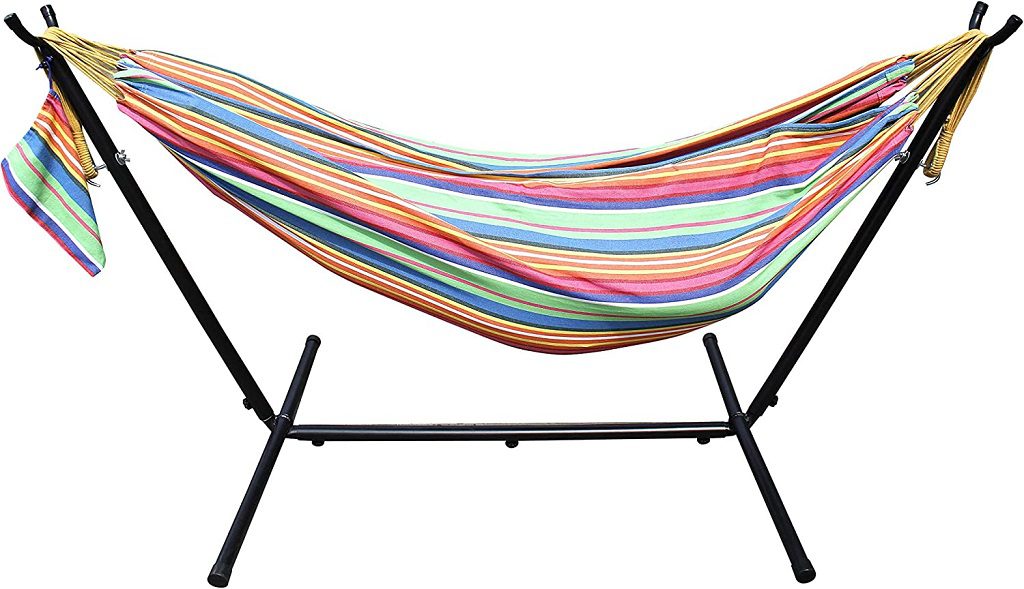 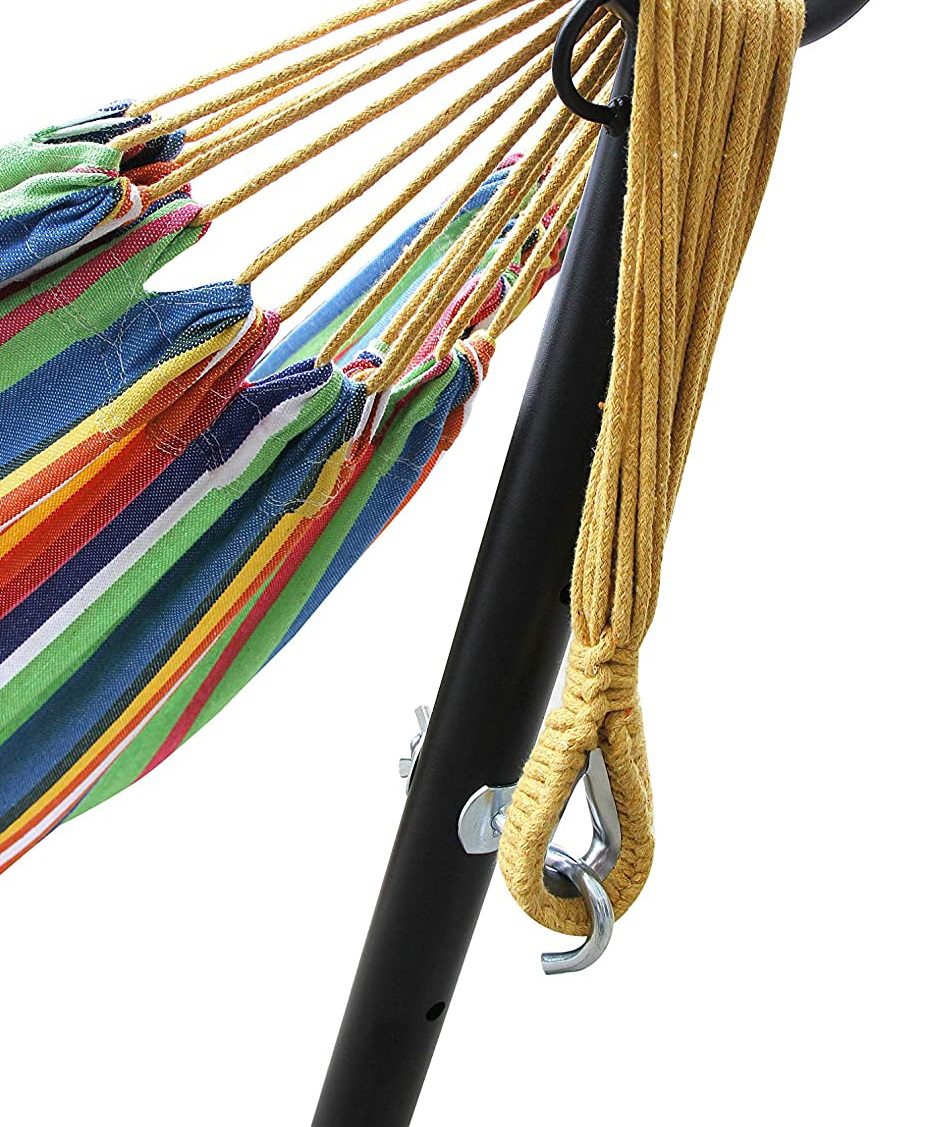 I didn’t choose this hammock in the end for two reasons:

5 Things to Check Before You Buy a Hammock

Here are 5 things you should check before you buy your first hammock.

The key points are:

Thanks for reading my guide to the best cheap hammock with a stand. My name is Daniel Woodley and I first published this article on the 29th of July 2022 here at DIY Gardening.

Discover more helpful hints and tips from me over at the blog or explore DIY Gardening’s essential garden products.

I’m a keen amateur gardener who’s trying to reduce his reliance on harmful weed killers and other chemicals but I accept there is a place for them in some limited scenarios.

I also enjoy growing vegetables and fruits, as well as my herbaceous borders and small container courtyard.

These weed killers aren’t the strongest but are safer for pets and children. Most contain fatty acids which kill off the weeds slowly but safely. Start Here

These three products all work very well at killing and preventing lawn moss, two of them are organic and safe too. Start Here