“Quite possibly the slowest acting patio cleaner – ever”

Tested by Daniel at DIY Gardening

Hey, my name is Daniel, and I used to work with cleaning chemicals as part of my previous job, so I know a few things about cleaning driveways, patios, blocks and other surfaces.

Patio Magic is one of the most popular patio cleaning products in the UK and is sold in most DIY stores and on Amazon, but reviews are mixed with some consumers saying it’s the best product ever while others state it doesn’t work at all.

What’s going on? Why are the reviews inconsistent?

On this page, I’ll show you some before and after photos, and provide you with an explanation as to why some customers say it doesn’t work.

I’ll also provide step-by-step instructions so you can get the best from Patio Magic, and I’ll suggest alternatives that work quicker. 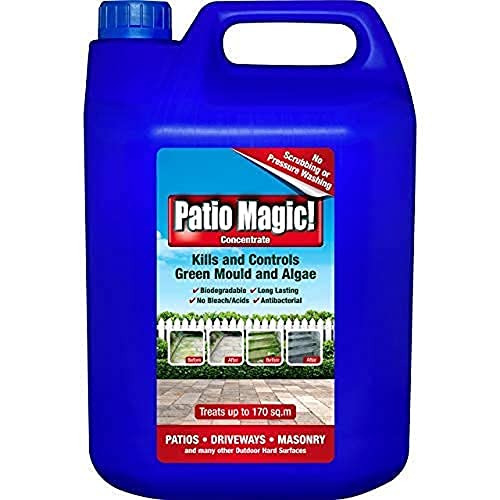 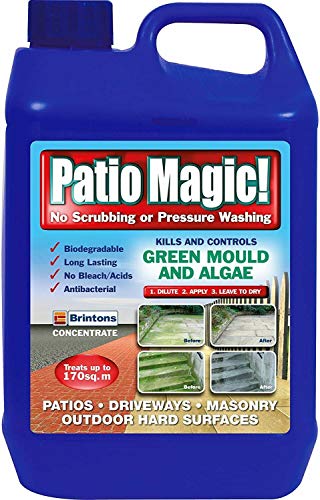 Before and After Photos of Patio Magic

There is a concrete slab outside my door, and I treated half of the slab with Patio Magic and took a photo.

One week later, I took another shot.

The 45 days after application, I took another photo. 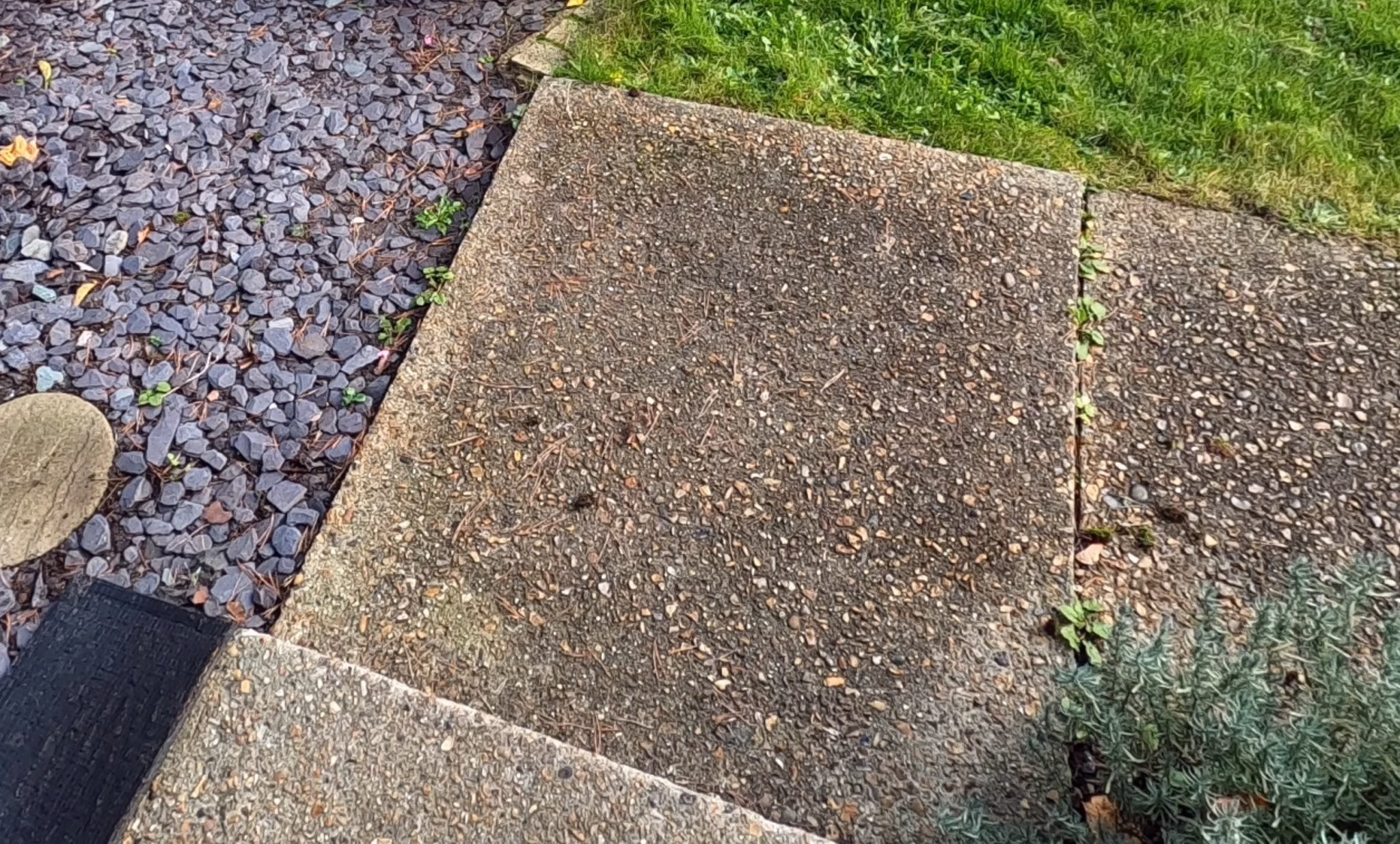 This is the concrete slab before application. It’s covered in lichen, mould, algae, moss and dirt. 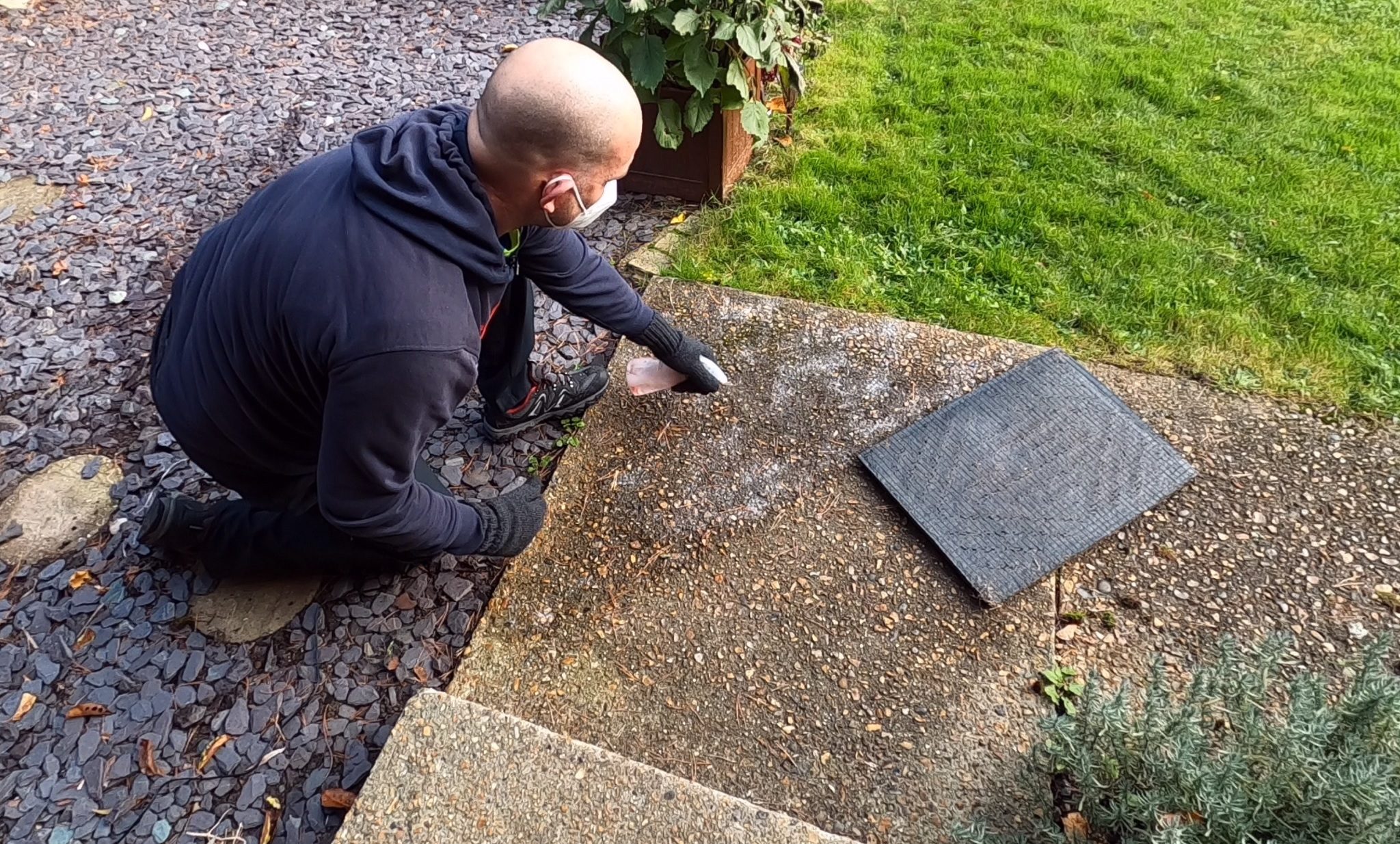 This is me applying Patio Magic to half the patio slab. Note the face mask and gloves. 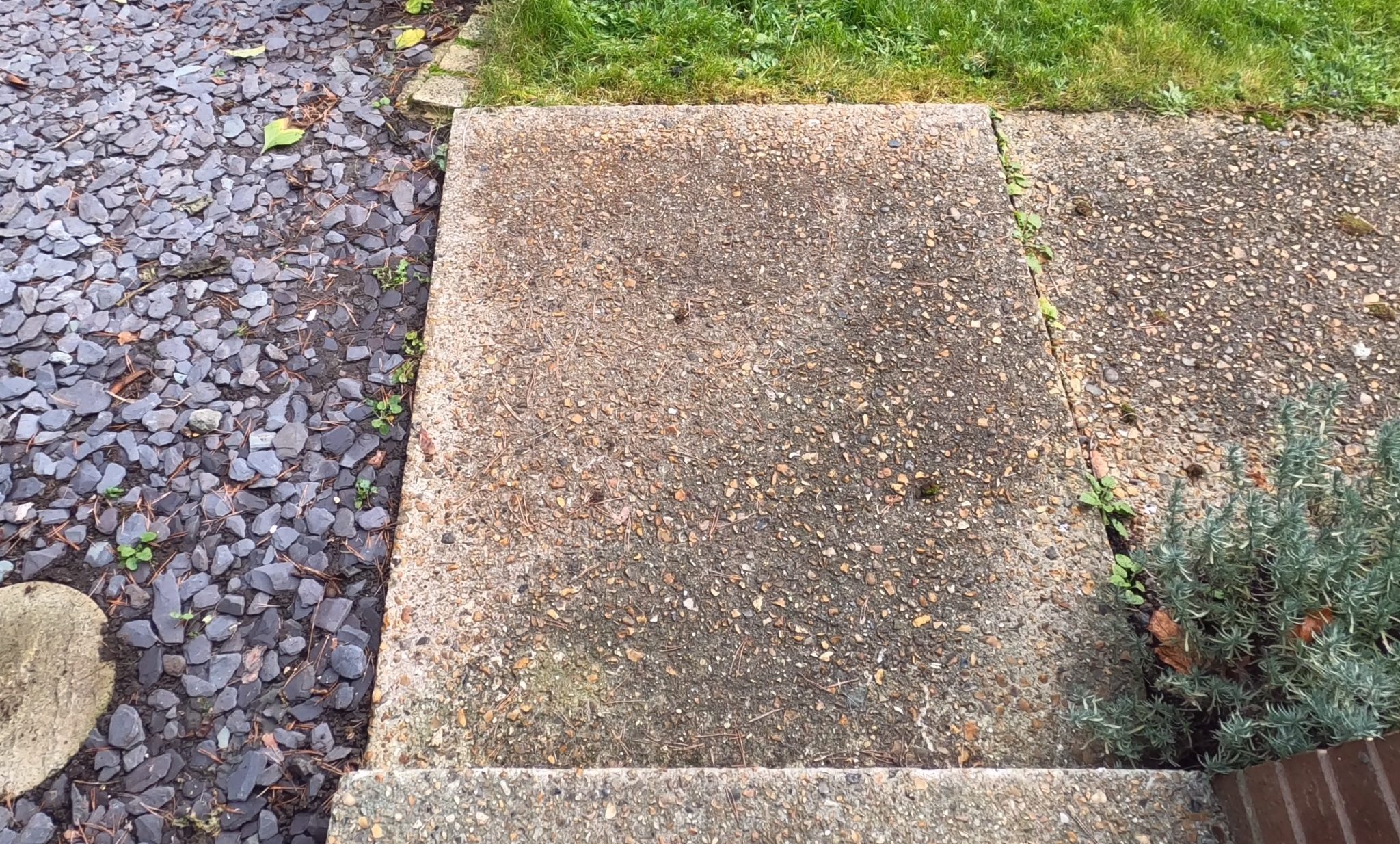 This is what the concrete slab looked like after two weeks. Note the lighter colour in the top left side of the slab. 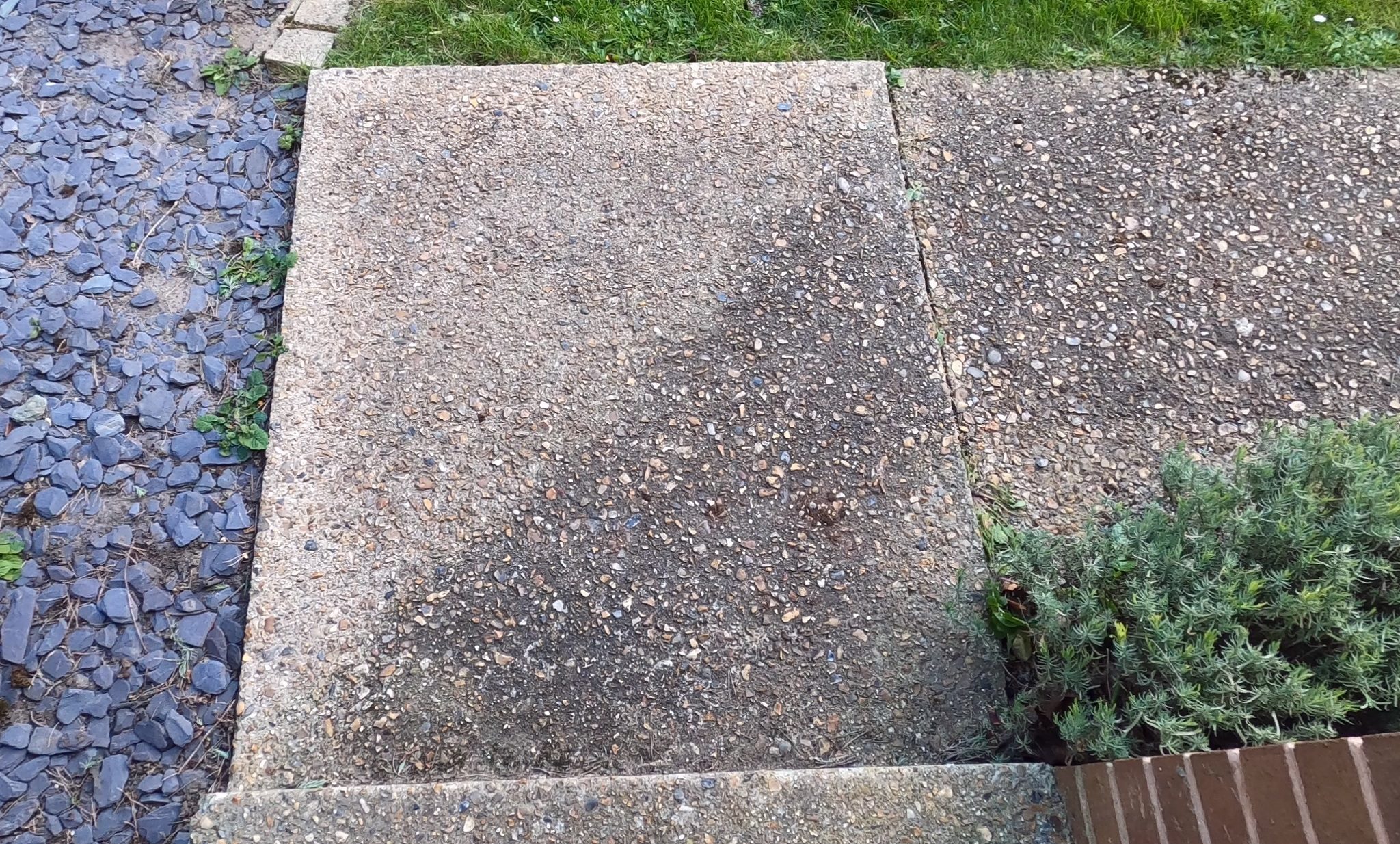 This is how the patio slab looks 45 days after I applied Patio Magic. All of the moss, mould, algae and lichens are gone.

(I didn’t use power washers, brushes or even water to get these results. I didn’t even wash Patio Magic off the surface, I just applied it and left it alone for 45 days) 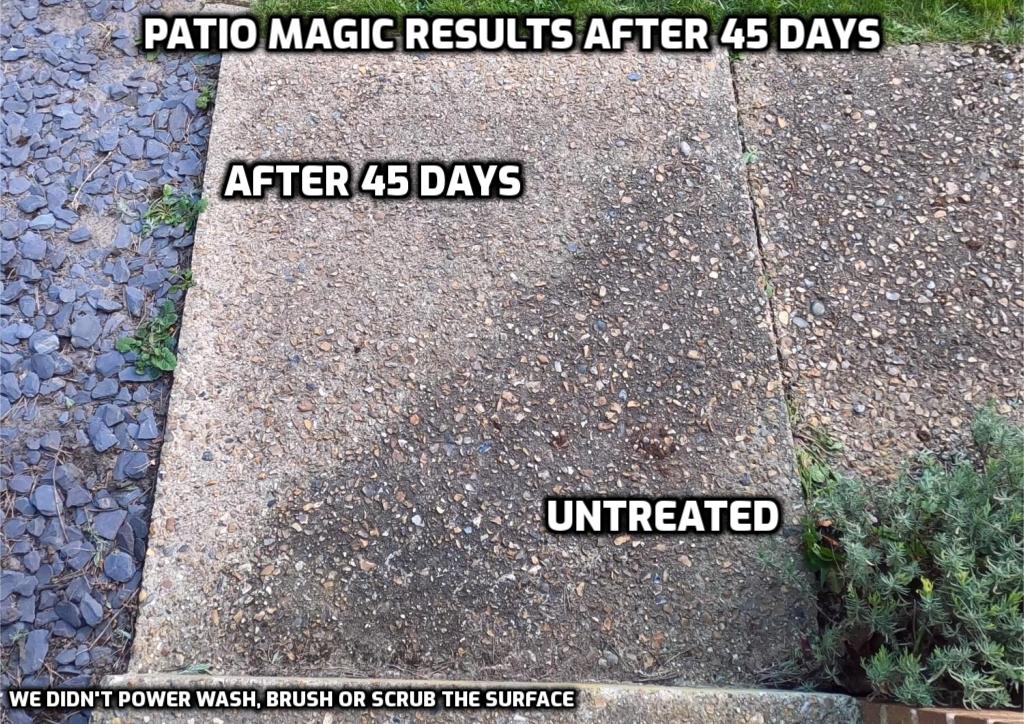 As you can see from the before and after photos, Patio Magic does work, but only if you’re very patient.

It took about two weeks before I saw a noticeable improvement and about 45 days until the difference was striking.

Patio Magic is the slowest product on the market but there is a reason for this.

To find out why Patio Magic takes so long to work, check out my video:

Why Does Patio Magic Take so Long to Work?

Patios become dirty and look grubby because lichens, mould, algae, and moss grows on the surface.

Unlike many other cleaning products, Patio Magic isn’t designed to melt away this growth.

Patio Magic contains a fungicide, and while that will kill the lichens, algae, mould and moss, it won’t burn them off the patio.

After applying Patio Magic, the patio will initially look the same as it did before.

However, as the organic matter dies after the application, it’s simply a case of waiting for the lichen/mould/algae etc., to degrade and decay away – this usually takes around 30-45 days.

Put it another way; Patio Magic will kill whatever is growing on your patio and ruining its appearance, but it won’t remove it.

Patio Magic isn’t a powerful acid that melts away whatever it comes into contact with. Instead, you need to wait for the matter to naturally decay away after the treatment.

Patio Magic does work, but only if you have patience – It’s not for everyone, but there are alternatives.

In a Hurry? Use This Alternative to Patio Magic

If you’re in a hurry, Patio Magic isn’t for you; here’s a couple of reviews I found online:

I followed the instructions exactly and after 48 hours, I can’t see any change in the appearance of my patio.

I waited a few days and nothing. I got a different product and it cleaned the patio in a few hours. 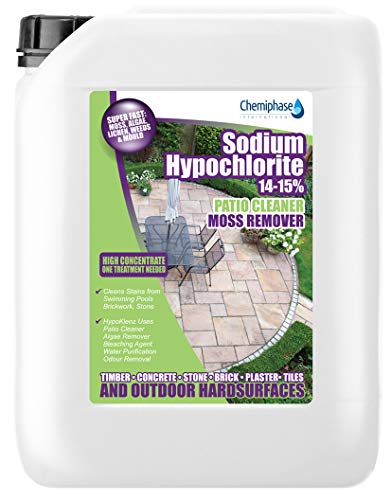 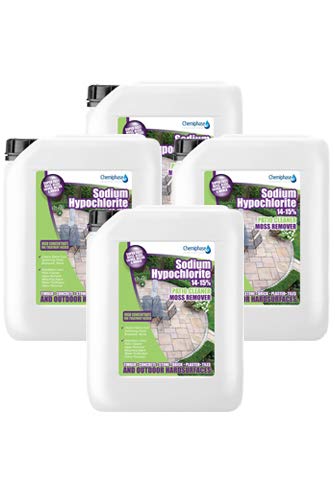 Sodium Hypochlorite is a powerful bleach with a high alkaline content, so high that it’s corrosive to lichen, mould, moss and algae.

This chemical is widely used in the cleaning industry and can be found in dozens of professional and readily-available patio cleaning products.

Unlike Patio Magic, this chemical will dissolve the organic matter growing on the patio and in many cases, it will get rid of it in less than an hour.

I’m not exaggerating when I claim that you can quite literally watch the organic matter dissolve off your patio.

The video below was published by Dirty Drive-Away and contains everything you need to know about this product.

The before and after images are also nothing short of incredible:

The Drawbacks of Using Sodium Hypochlorite

Sodium Hypochlorite is a bleach and it’s harsh, here’s why I don’t use it:

The Benefits of Patio Magic

This is why I rate Patio Magic:

I prefer Patio Magic as I don’t mind waiting for the dead matter to decay away naturally, and I know if I put it down once a year in the spring, that will be enough to remove and prevent lichens, algae, moss, mould etc.

I would only consider a more aggressive approach if I were in a hurry to clean the surface, perhaps I had visitors, or I was selling the house and wanted to spruce up the garden for potential buyers etc.

I’ve previously used the ingredient in Patio Magic on roof tiles to kill off green mould, lichens, and other organic matter, the feedback from customers has been very good.

Patio Magic states in their marketing that the customer can see results in “3-4 days”.

This is nonsense and probably explains why some customers are disappointed and leave a negative review after a few days.

I can only presume that telling the truth would adversely affect sales as most people want fast results and wouldn’t want to wait 45 days.

The Do’s and Don’ts of Using Patio Magic

These tips will help you get the most out of Patio Magic:

Based on my experience, mould, lichens, moss and other similar organic matter won’t start to regrow for at least a year and possibly much longer if the patio is located in a sunny spot.

If your patio is in a very shaded and damp garden, reapply Patio Magic once a year. If it’s in a sunny spot, apply between once a year and once every two years.

If you don’t want to use chemicals to clean your patio, the next best thing is a pressure washer.

This is a more labour-intensive approach, and some lichens are so difficult to remove that they may remain.

Another option is to use a stiff broom and washing up liquid as this acts as a degreaser, removing pollution from the surface.

Neither of these options will be as effective as Patio Magic or Hypochlorite, but they are more environmentally friendly.

Below I’ll answer the most common questions about Patio Magic:

Why Should I Trust Your Advice?

I spent 17 years working with the chemical that’s found in Patio Magic, so I know exactly how it works, what it does and what it doesn’t do. Go check out the video and before and after photos if you need more convincing.

Can I Mix Patio Magic and Hypochlorite to Get the Best of Both?

Hypochlorite cannot be mixed with other chemicals as it will produce noxious gases.

What is the Best Way to Apply Patio Magic?

The best way to apply Patio Magic is via a small 5-litre pump sprayer, as you can carefully control how much product is used and avoid excess runoff onto lawns, borders and watercourses.

You can use a watering can but there’s an increased risk of wastage.

Patio Magic contains a fungicide that will kill off the following:

These four at what makes most patios look dirty and dull.

However, if your patio is simply dirty from mud or even from pollution, perhaps because you live near a motorway, then Patio Magic will have no effect as it’s a fungicide, nothing more and nothing less.

Which Chemical is the Safest?

Both have the potential to harm humans and the environment, but Hypochlorite is more corrosive and less stable.

Can I Use Domestic Bleach Instead of Hypochlorite?

Hypochlorite is a bleach; the only difference os most domestic bleaches are in gel form, so they stick to the side of toilets. The best product for external cleaning would be a watery product rather than a gel product. Also, domestic bleach is more expensive as it’s sold in smaller bottles.

Can Patio Magic Be Used With Patio Sealers?

If you want to seal your patio, you’ll need to power wash it first to completely remove any contaminants before the sealer is applied.

You can certainly treat the patio with a weedkiller and a moss treatment product such as Patio Magic, as this can prevent the weeds and moss from reappearing, but the surface of the patio will also need to be thoroughly cleaned as well.

Here are the basic steps to cleaning and sealing a patio:

Which is Best, The Concentrate or Ready to Use Version?

The ready-to-use bottle is a watered-down version of the original concentrated product.

The ready-to-use version doesn’t go very far and costs much more per square metre but has the advantage that you don’t need to mix it with water.

I never use ready-to-use chemicals as there’s more plastic wastage, they cost more and don’t treat as big a surface.

The concentrated version lasts for years and isn’t expensive so I recommend this product.

I Analysed 4469 Online Reviews – Here’s What I Found

As part of my research into Patio Magic, I analysed 4469 Amazon reviews.

86% of reviewers gave Patio Magic a 4 or 5 stars rating. This is very high compared to alternative products.

A considerable number of the negative reviews were from customers who hadn’t waited more than a few days before leaving a rating and comment.

There were several complaints that pet cats and dogs had become ill after licking the product from the patio (despite the warning label stating that pets should be kept off the patio until the product had dried).

I hope you found my honest review of Patio Magic insightful. 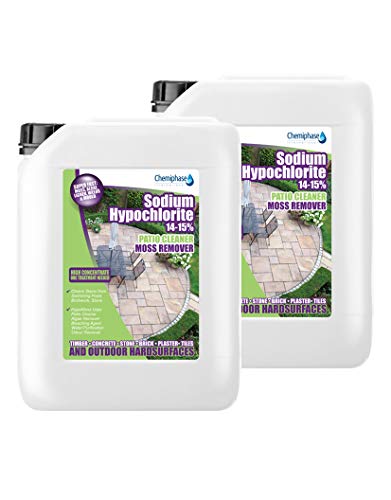 Thanks for reading this guide to Patio Magic and alternatives. Daniel Woodley published this here at DIY Gardening and the article was last updated in April 2022.

Discover more helpful hints and tips from Daniel over at the blog or explore DIY Gardening’s essential garden products.

Daniel is a keen amateur gardener trying to reduce his reliance on harmful weed killers and other chemicals but accepts there is a place for them in some scenarios.

He also enjoys growing vegetables and fruits, as well as his herbaceous border and container garden.

These weed killers aren’t the strongest but are safer for pets and children. Most contain fatty acids which kill off the weeds slowly but safely. Start Here

These three products all work very well at killing and preventing lawn moss, two of them are organic and safe too. Start Here