Hello and welcome to DIY Gardening’s guide to pet-safe weedkillers.

My name is Daniel Woodley, and I’m a keen gardener, and the proud owner of a rebellious Labradoodle called Dougie.

According to the National Pesticide Information Center, one of the most popular garden weedkillers in the world can persist in the soil for up to 6 months and can cause pets to “drool, vomit, have diarrhoea, lose their appetite, or seem sleepy” (source).

I don’t know about you, but I don’t want that in my garden, not when I have a pet, and when there are other, much safer options.

Below I’ll show you safer alternatives that work well on weeds and moss. 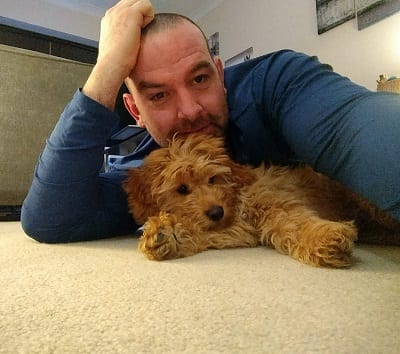 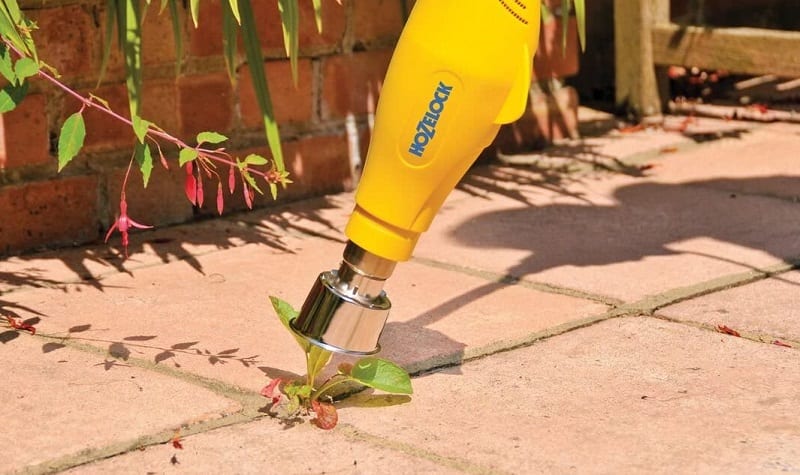 Electric weed burners are powered from the mains and provide a powerful blast of heat to kill off the weeds.

There is much confusion about how these devices work. Contrary to what many consumers think, they aren’t designed to burn the weeds to a crisp or vaporise them but instead to kill them with a short blast of scorching air. The dead weeds then naturally breakdown and decompose.

All it takes is a 5-second blast, and the weeds will die, then within a week, most should be well on their way to decomposing.

You can use these pet-friendly weed killers on patios, driveways, paths, gravel, most other hard surfaces and also flowerbeds.

Unfortunately, you can’t use electric weed killers on lawns as it will also kill the grass a few inches on either side of the weeds. 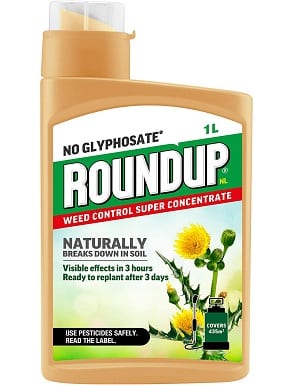 Much Safer Than Regular Roundup

Roundup Natural is produced by Bayer and is a safer alternative to the other chemical-laden products they have in their range.

The key ingredient in this pet-friendly weedkiller is Pelargonic acid which breaks down naturally and harmlessly in the soil.

Use this systemic pet-safe weed killer to kill grass, clear weed-infested areas of the garden, remove weeds from gravel paths and gravel driveways, along fences etc.

This US government factsheet states that Pelargonic acid is found naturally in foods and is used commercially as a food additive and consuming or inhaling small amounts poses no risk to human health. It also states “toxicity tests on non-target organisms, such as birds, fish, and honeybees, revealed little or no toxicity”.

There are two things I don’t like about this product:

Roundup Natural should not be used on hard surfaces such as patios or tarmac due to potential runoff. The Pelargonic acid needs to come into contact with the soil so it can degrade naturally.

It’s a mild skin irritant, so you’ll need to keep children and pets away from the area until it’s dried, but you should be doing that anyway.

Choose from the concentrated version, which is ideal for more extensive gardens or try the ready-to-use product, which is perfect for smaller areas. 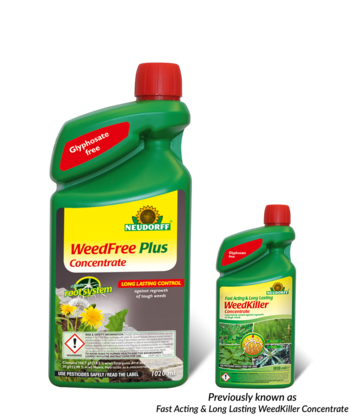 Available as a ready-to-use product or in concentrate form, this pet-friendly weed killer from Neudorff contains both Pelargonic acid and Maleic Hydrazide.

Both chemicals are much safer than the toxic soup found in many other brands; they also break down easily and quickly in the soil; Maleic Hydrazide has been regulated and approved for use on potatoes as a sprout suppresser since the 1950s.

As with Roundup Natural, use this product on soil, grass (to kill the grass), gravel, and fences. Neudorff WeedFree will kill almost all plants, so keep it away from anything you want to keep.

Avoid using this excessively on hard surfaces where there’s potential for runoff. While it’s effective on all surfaces, the ingredients need to enter the soil so it can degrade; otherwise, it may persist.

In short, Maleic Hydrazide is far safer than most pesticides when used in the garden, and dogs are unlikely to suffer adverse effects from short term, low dose exposure. Just keep the bottle away from pets and allow the surface to fully dry after application. 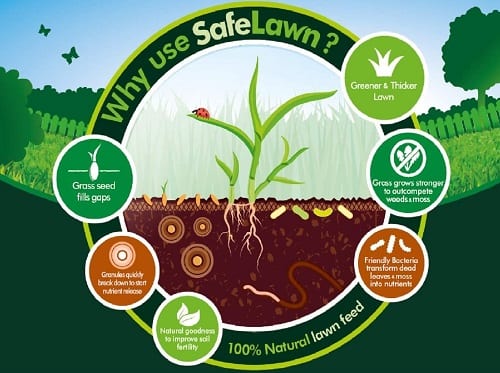 I know from experience that if you maintain a lawn properly and keep it healthy, weeds and mosses struggle to take hold as the thick grass suppresses them.

The opposite is true for poorly maintained lawns; bare patches soon attract seeds that germinate into weeds, and moss is always ready to spread onto damp, waterlogged lawns.

SafeLawn contains three key ingredients, all of which are child and pet safe:

This product is 100% natural, and it contains no pesticides.

The manufacturer even claims that LawnSafe is so pet-friendly that you can apply it frequently, up to a maximum of every three weeks.

I’m always honest with our readers and here’s what I don’t like about this product: 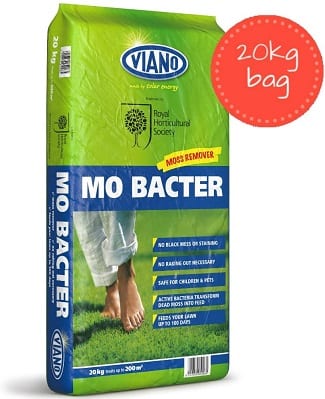 MO Bacter is the best natural and organic product for killing lawn moss, it contains no harmful chemicals at all and is 100% safe to use around children, pets and all wildlife.

The ultimate pet-friendly moss killer for lawns, MO Bacter contains a natural bacteria that eats away at the moss until it breaks down into a feed for the lawn.

Just sprinkle MO Bacter onto the grass and as the moss breaks down, overlay any bare patches with new grass seed which will germinate in the decomposing moss

There are so many advantages to using this natural and pet-friendly product:

If you have a very mossy lawn, we recommend reading our detailed guide to removing and preventing lawn moss which contains excellent advice on how to stop lawn moss from returning.

The ONE Issue I have With This Type of Moss Killer

The bacteria in this moss killer and all others like it, takes time to act. We’re talking months here, not days. If you want a product to turn your mossy lawn black so you can sow grass seed and achieve a lush lawn in a few weeks, this product isn’t for you. Use lawn bacteria to slowly kill off and consume moss over time, you should also periodically sprinkle the lawn with grass seed to fill in bare patches and suppress weeds.

In addition to the products suggested on this page, you can also try:

You don’t always need to use chemicals to remove lawn weeds and this tool is lightweight, easy to use and pulls up deep roots too. Check out the thousands of positive reviews on Amazon: 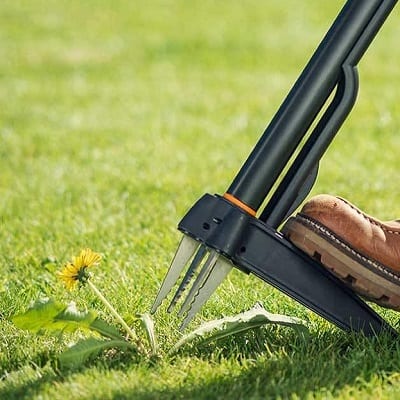 This is the perfect tool for removing weeds between patio slabs or in other narrow channels. You’ll need to buy the pole separately but the manufacturer is currently offering a guarantee. 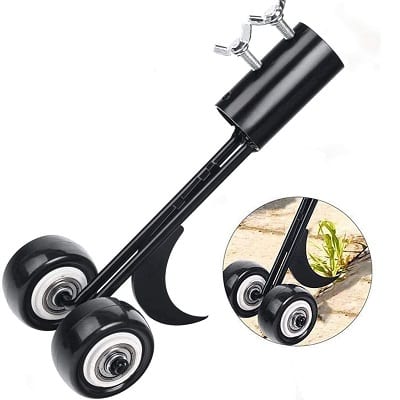 Got a small garden and looking for a hand tool to remove weeds from narrow channels? There’s no need to buy the pole version, this hand tool is ideal for small patios and block paved areas. 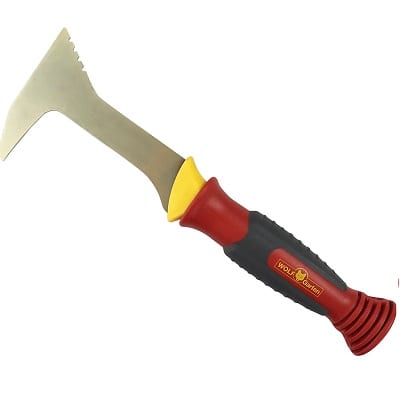 If you need a weeding tool for more delicate areas of the garden, perhaps near fruit and vegetables or in a packed flower border, put the hoe away and try this simple yet ingenious product instead. 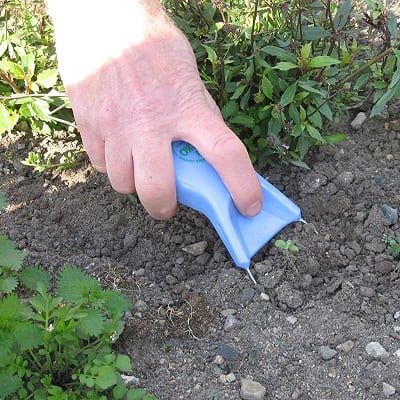 Where can pet-friendly weed burners be used?

You can use pet-friendly weed burners on any surface that won’t be damaged by heat. Patios, concrete, driveways and gravel are places you can safely use a weed burner.

Yes, weed burners are effective but need to be used periodically to keep weeds at bay. The chemical weed killers listed here are safe provided the manufacturer’s instructions are followed. The moss eating bacteria is 100% safe to pets.

Vinegar isn’t very effective and most grasses and perennials will soon grow back. Food grade vinegar found in most shops is very weak, although horticultural vinegar is stronger and effective on some broad leaves during hot weather.

Boiling water is very effective at treating weeds and can permanently kill many of them. The seeds are often killed off by the hot water too. Hot water will kill lawn grass and many plants though so careful handling and application are required.

I really hope you found my guide to safer weedkillers helpful. I’ve reduced my reliance on harmful products significantly in recent years, and I hope you can too.

Any product can be harmful to pets and children if it’s not used properly so, please take care and always read the label

You can find out more about me and discover more of my content via my profile page:

Explore what we feel are 25 of the best lawn and garden edging ideas. Thoughtfully created by the team here at DIY Gardening. Start Here