See more of our plants

How to grow Dianthus Carnations, Pinks and Sweet William

Created by the team here at DIY Gardening

Perfect for containers, the edges of borders and even in rockeries, Dianthus provide perfect ground cover while also producing an abundance of flowers during the spring and summer.

There are hundreds of species of Dianthus but most good garden centres stock either Carnations, Pinks or Sweet Williams, although very similar there are some subtle differences between the three.

The good news is all three Dianthus species are easy to grow and maintain – just follow our growing guide. 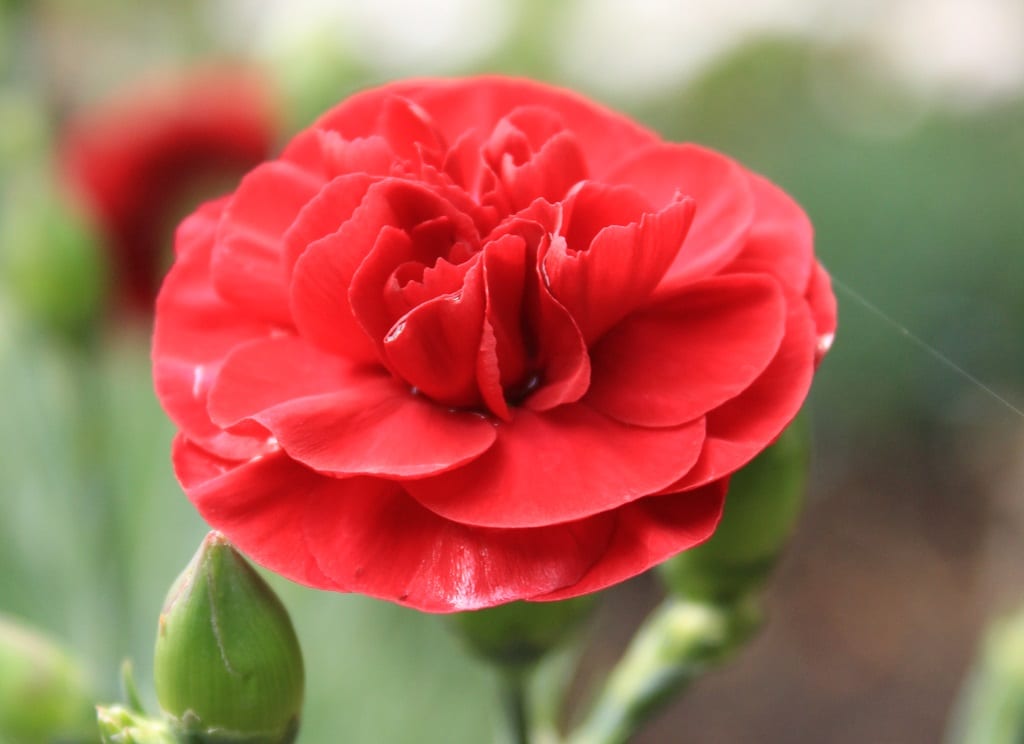 What’s the Best Type of Soil/Compost for Dianthus?

All Dianthus prefer fertile, well-draining soil/compost so will perform well in raised flowerbeds/borders, rockeries and elevated areas of the garden.

Dianthus can be grown in containers, but we recommend adding coconut coir and either perlite or vermiculite to aid drainage and moisture control. Containers should have drainage holes at the base and preferably you should raise them off the ground with feet.

Compacted waterlogged soil can lead to stem and root rot so try to aerate heavy clay soils with additives where possible. 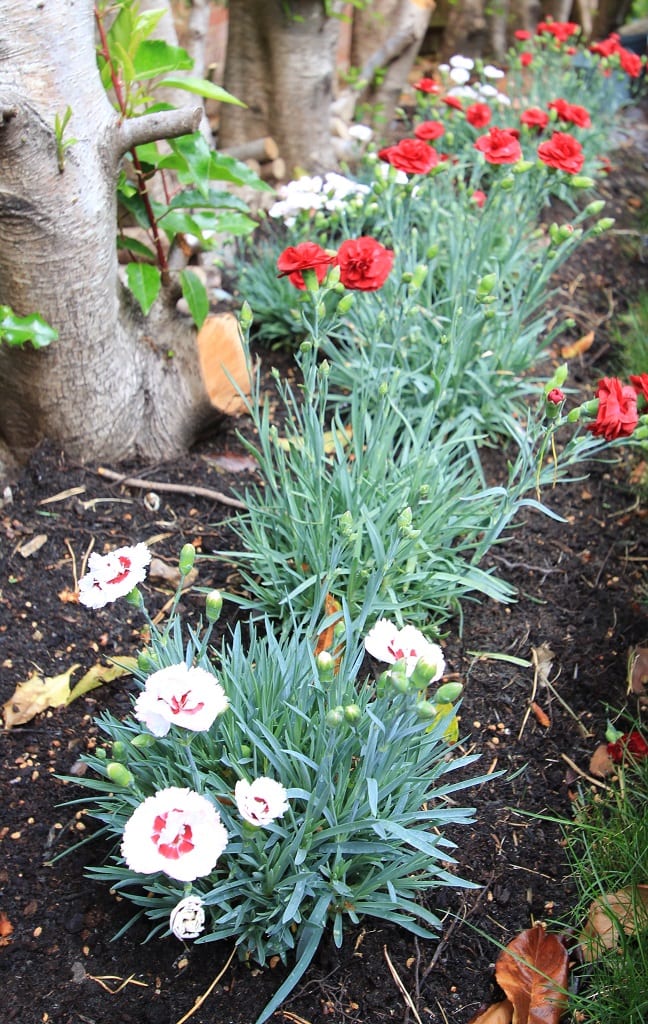 The Best Location For Dianthus

In addition to locating Dianthus in well-draining fertile soil, do place them in a sunny position if possible.

While Dianthus will cope with a partially sunny spot, they prefer at least 6 hours of sunshine per day.

Avoid areas of the garden with little or no sunlight as you’ll see fewer flowers.

Dianthus are generally considered frost-resistant but as with many plants, may suffer during a particularly hard frost.

A good starting point for borders and flowerbeds is to space Dianthus around 12″ or 30cm apart.

You should plant more compact species of Dianthus between 6″ and 8″(15cm/20cm) apart, which is also an ideal spacing for plants in containers.

How Often Should Dianthus be Watered?

Dianthus should never be allowed to sit in waterlogged soil as rot root is the number one cause of plant failure.

After planting out, water the plant regularly until established and growing well.

Assuming the Dianthus has been planted in well-draining soil or compost, water weekly during the summer and twice a week during very hot spells. You can water more frequently provided the soil is well-drained.

Avoid overhead watering to prevent crown rot, which is a common problem across all Dianthus species. Water from the side and avoid splashing the centre of the plant. This is especially important if the Dianthus has been planted in a shaded location where the excess water may not evaporate.

Dianthus are well-known by gardeners for their both heat and drought tolerance, so they can easily cope with a typical British summer.

How Much Fertiliser Does Dianthus Plants Need?

Dianthus prefer a fertile growing medium, so for optimal growth and blooming, apply a general garden fertiliser at the time of planting and then every 2 -4 weeks during the spring and summer.

Dianthus are hardy plants, so while regular fertilisation helps with growth, it’s not essential. As an alternative, you can bed in well-rotted manure once a year in the spring.

How to Prune and Deadhead Dianthus

Most Dianthus plants will bloom from spring to late summer, but you can extend this with regular deadheading.

Many species of Dianthus, such as Passion (a Pink) suffer from heavy flowers (often several on the end of each stem) which causes the stems to bend right down to the soil. Regular deadheading and tidying up the plant by pruning back long stems should help to keep the plant looking neat and compact and may also extend the flowering period into the Autumn.

You can prune Dianthus anytime from mid-spring to Autumn if it needs a general tidying up. Aggressive pruning, leaving only a few inches of base growth, should be done in the Autumn. 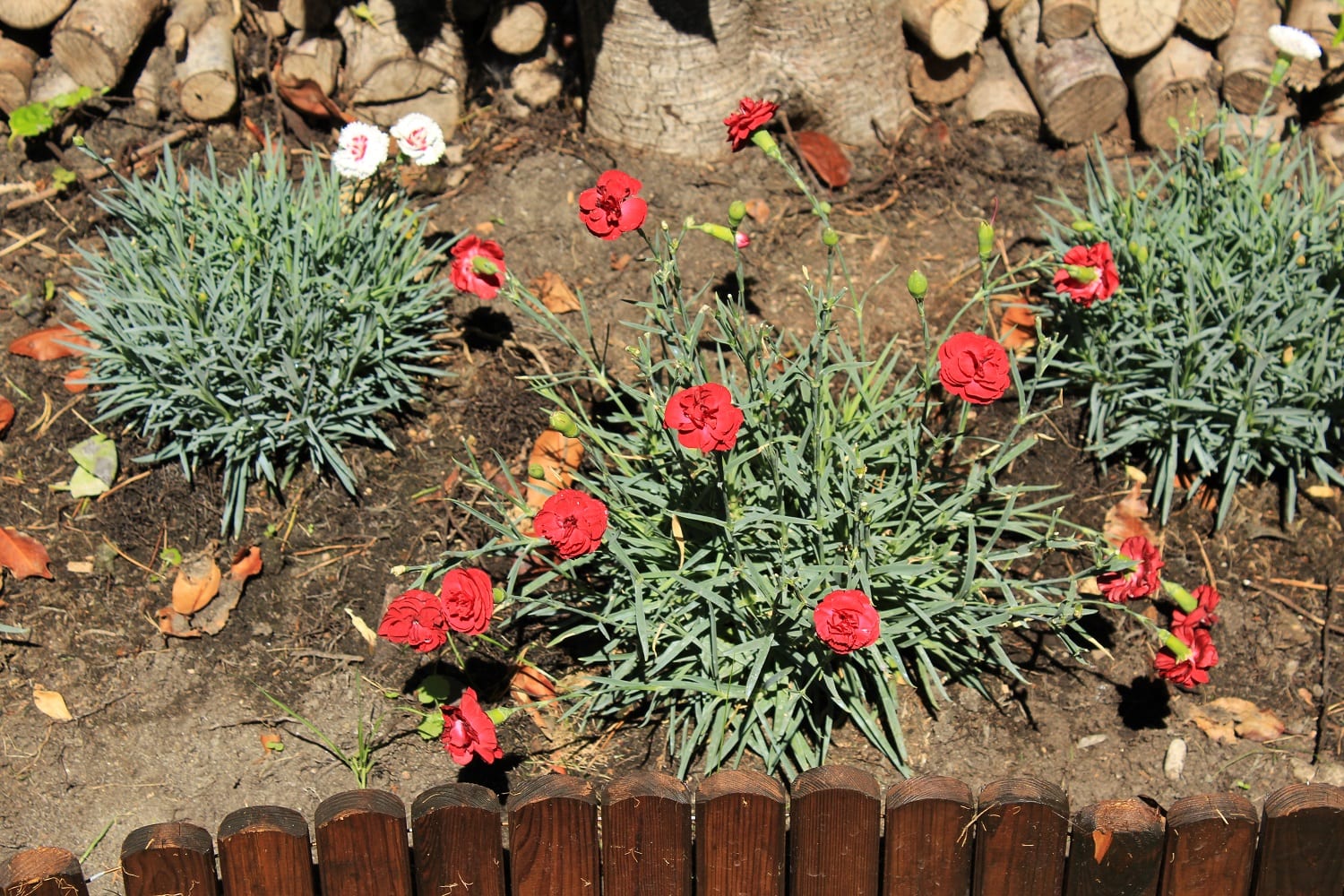 The image above shows Dianthus “Passion” (a Pink) that’s leggy with large heavy red blooms. To either side is recently pruned Dianthus “Coconut Sundase” (also a Pink).

The image above shows Dianthus “Passion” (a Pink) that’s leggy with large heavy red blooms. To either side is recently pruned Dianthus “Coconut Sundae” (also a Pink).

Dianthus plants are very resilient, and most garden pests tend to ignore them; however, problems usually arise when the plant is overwatered or located in a shaded location.

Stem, root and crown rot are the most common reasons for Dianthus to fail, but in general, Dianthus is easy to maintain and still a great choice for beginners or those with limited time for their gardens.

There are few pests to worry about, and most of them can be treated with commercial pesticides. Alan Titchmarsh once described Dianthus as “tough as old boots“, and we think his comment is spot on.

The team here at DIY Gardening hasn’t experienced any problems with pesky slugs or snails, but we have heard reports of spider mite, aphids and Carnation Fly maggots causing issues to other gardeners.

How Long do Dianthus Plants Live?

The most popular Dianthus plants are perennials, and we’ve found they last between 3-5 years before they need to be replaced or split.

To keep your Dianthus collection looking healthy and producing plenty of colourful blooms, we suggest regular splitting and propagating.

Every Dianthus species can be grown via propagation.

Start by pulling away or cutting off a non-flowering shoot, cut the stem to just below a leaf node and trim off the lower leaves, leaving only four top leaves. Then propagate as you would most plants; dip in hormone powder or gel and insert into a well-drained potting mix, water and kept sealed to increase humidity.

Once the roots have struck and appear at the bottom of the pot, it’s time to move them to larger containers.

Dianthus can also be split, and we recommend doing this every 3-5 years or when you notice dead spots at the centre of the plant.

Dianthus is a versatile plant often found towards the front of a border or flowerbed as they sit beautifully in front of taller companion plants such as roses, lavender and ornamental grasses.

Place them alongside popular annuals such as pansies, petunias and geraniums or if grown in a rock garden, choose alpine plants such as creeping phlox or stonecrops. 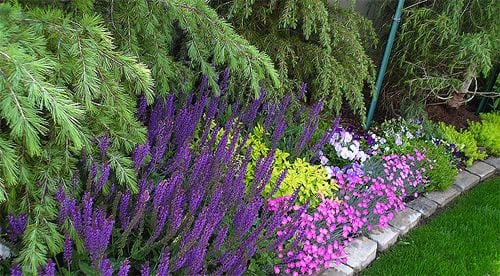 Try these companion plants, they go well with Dianthus: 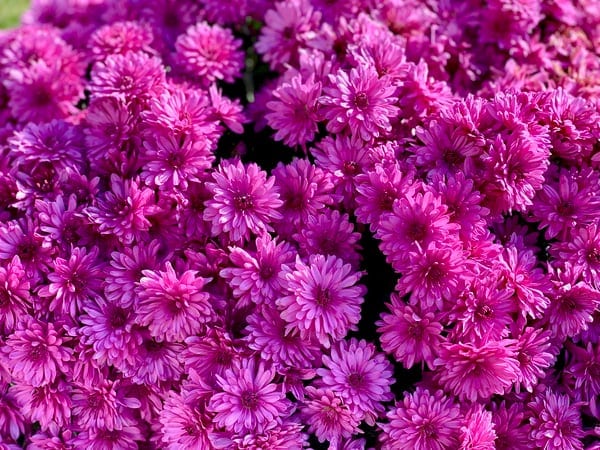 There are over 180 species of Aster to choose from and this perennial is a popular companion plant for Dianthus. 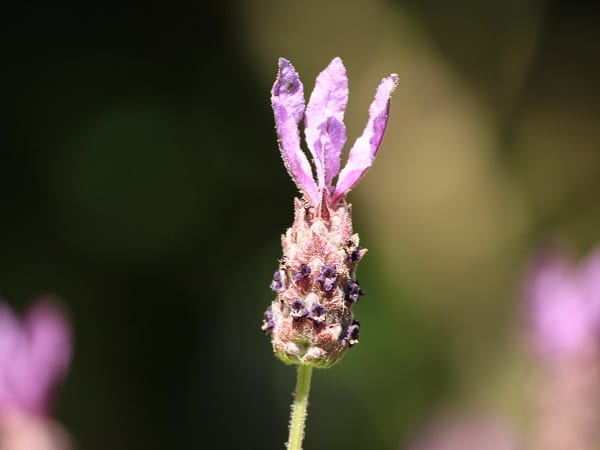 We have both Lavender and Dianthus in our garden, they pair together well even though both are very fragrant. 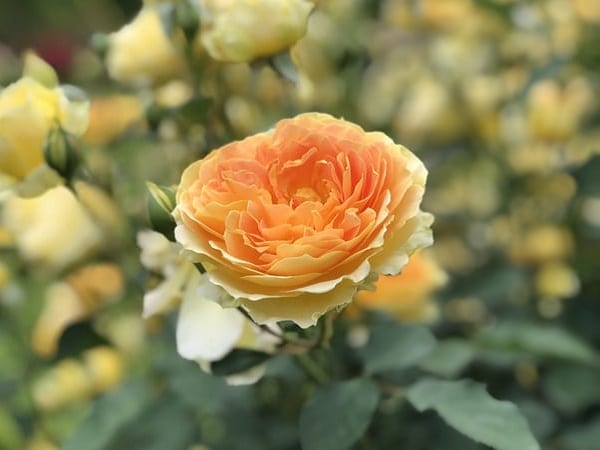 Like Dianthus, Snapdragons require well-drained soil and a sunny or partially sunny spot in the garden. 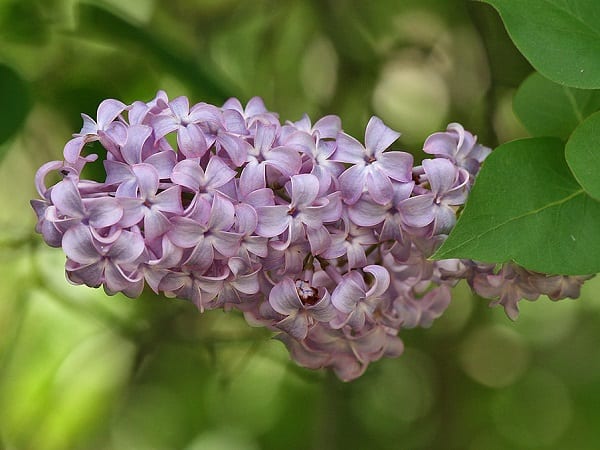 We think that Dianthus looks lovely set in front of Lilac shrubs and both prefer a sunny, well-drained spot in the garden. 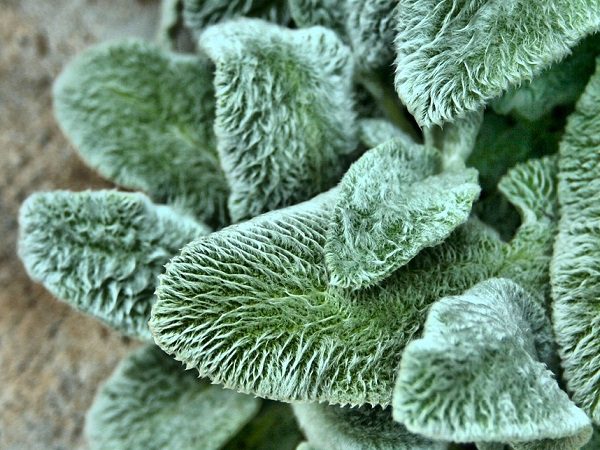 Another low-maintenance perennial, Lamb’s Ear also needs well-draining soil and a sunny or partially sunny spot in the garden.

Another plant with similar watering, deadheading & soil preferences is the Geranium, readily available at most garden centres. 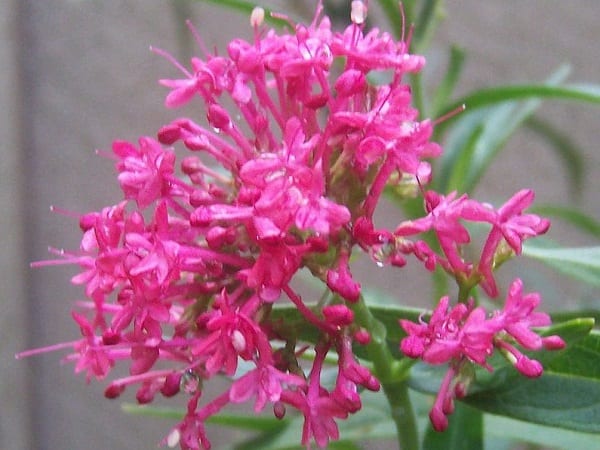 Red Valerian grows up to 1 metre tall and sits perfectly behind a row or two of low-growing Dianthus plants.

Photos of Dianthus From Our Garden

We took these photos in 2020, the red Dianthus is a Pink called “Passion” while the white and red is another Pink called “Coconut Sundae”.

All of these plants were grown via propagation and are less than one year old. We expect them to fill out and cover the ground well by next summer: 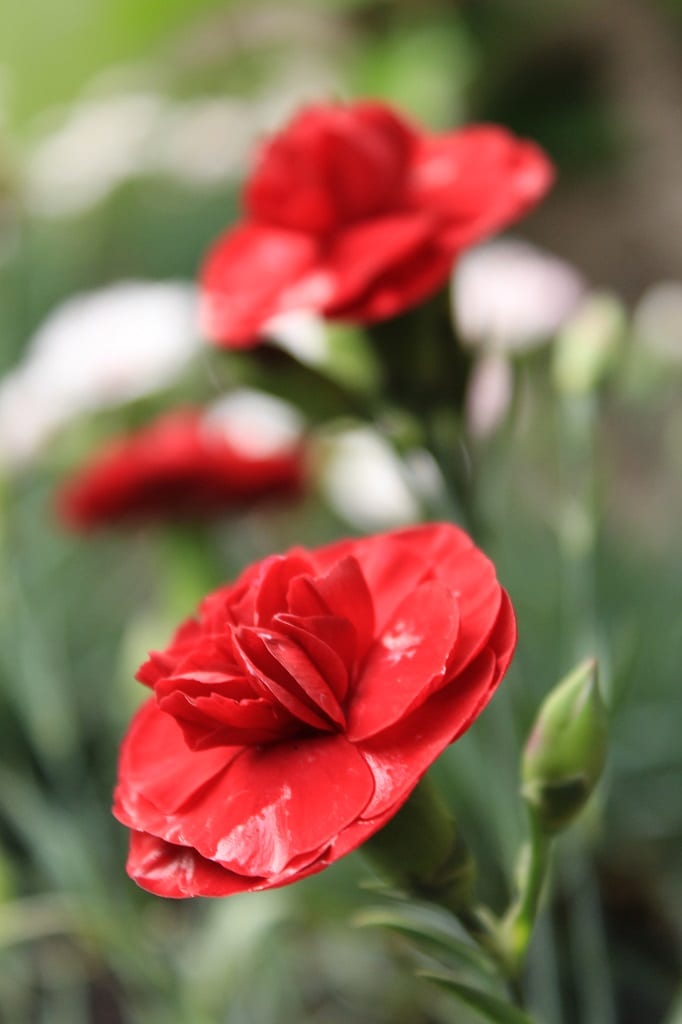 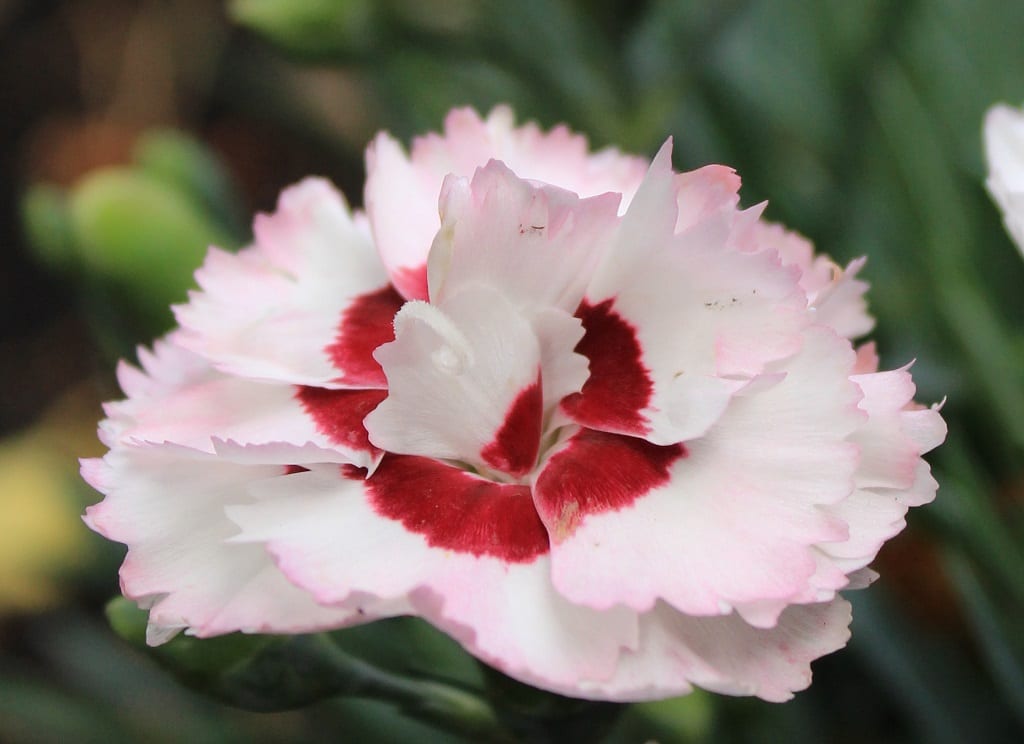 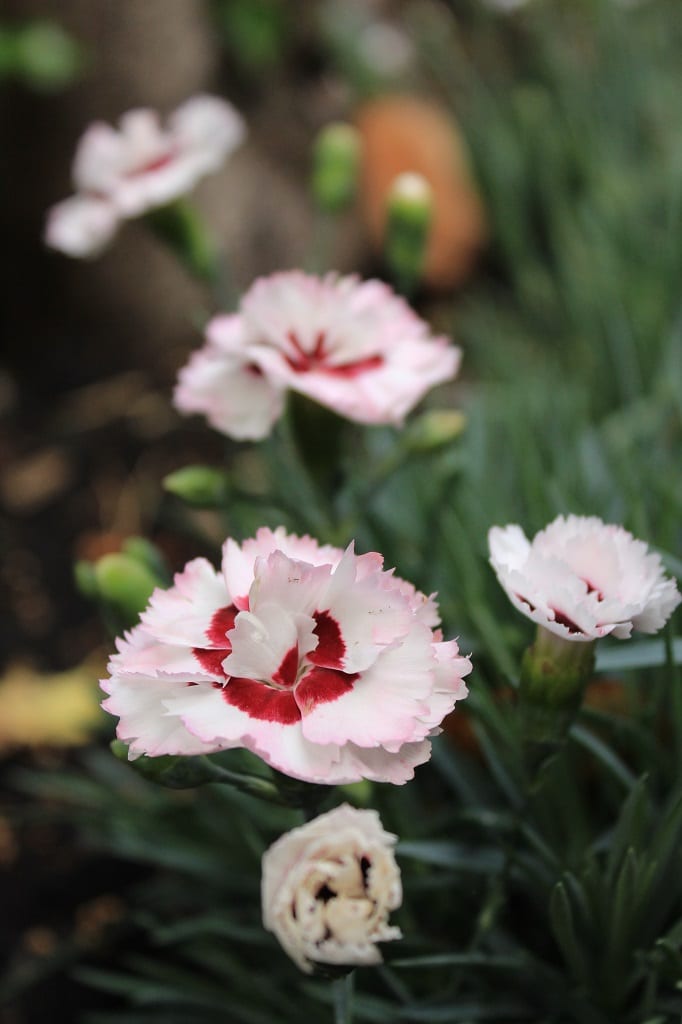 We’ve published more photos of Dianthus here, you are free to share them.

Here are our top ten quick tips for growing Dianthus:

With over 300 species of Dianthus to choose from, do your research as some are mound-forming and ground covering while others grow tall.

Place Dianthus between 6″ and 12″ apart for best results. Note that allowing some air to move around the plant is a good thing.

All Dianthus plants perform better in a very sunny spot, ideally with at least 6 hours of sun. Dark parts of the garden should be avoided.

Dianthus won’t last long if planted in waterlogged soil so choose a well-drained spot or add coconut coir/vermiculite to containers.

Some species of Dianthus can become leggy and lose their shape very quickly. Prune anytime from spring to autumn to maintain shape.

You can encourage more blooms and even extend the flowering period into autumn by regular deadheading of Dianthus plants.

The amount of fertiliser is up to you, just remember that Dianthus prefer fertile soil. We suggest every 2-4 weeks during the growing season.

Split Dianthus every 3-5 years to increase the number of plants, even perennial Dianthus won’t live forever and crown rot is a common problem.

Propagate non-flowering stems in late spring or summer and you can easily grow new plants to replace ageing, straggly Dianthus.

Below is a selection of products we recommend if you’re planning to grow Dianthus:

These lightweight secateurs are razor-sharp so are ideal for pruning and deadheading Dianthus. We currently own and use these secateurs. 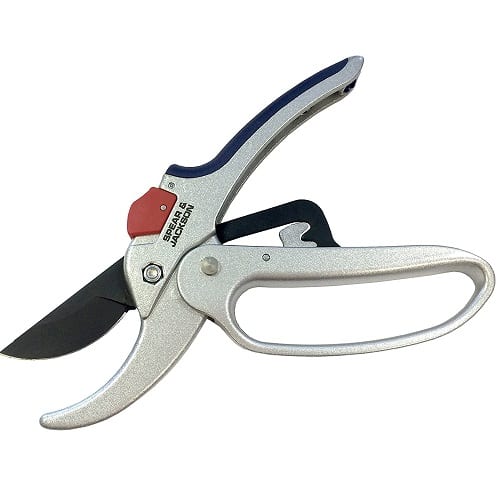 We think organic fertilisers are by far the best, although a little weaker, they are far safer for children, pets and the environment in general. 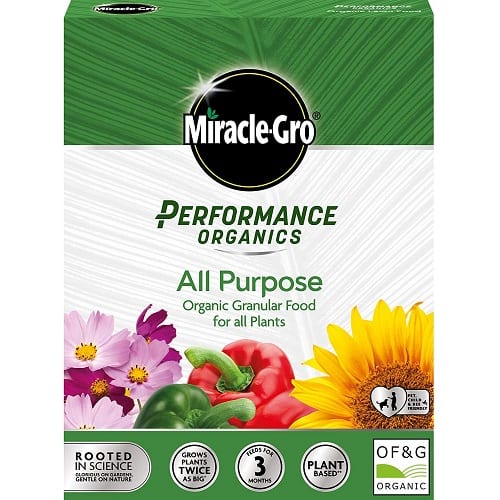 Want to grow Dianthus in containers? Aid all-important drainage and moisture control with coconut coir. We also use perlite and vermiculite too. 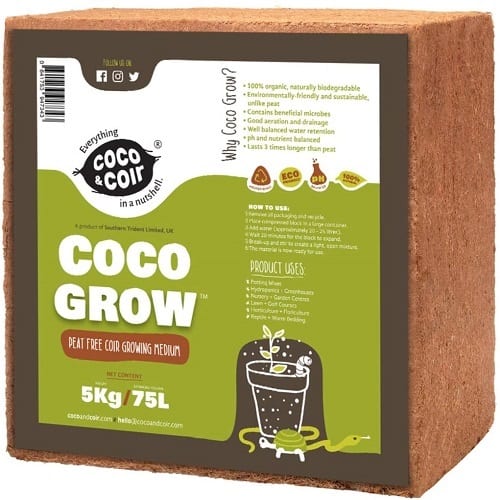 Cheap and easy to use, Miricle-Gro general plant fertiliser is best for Dianthus and most other garden plants that produce flowers. 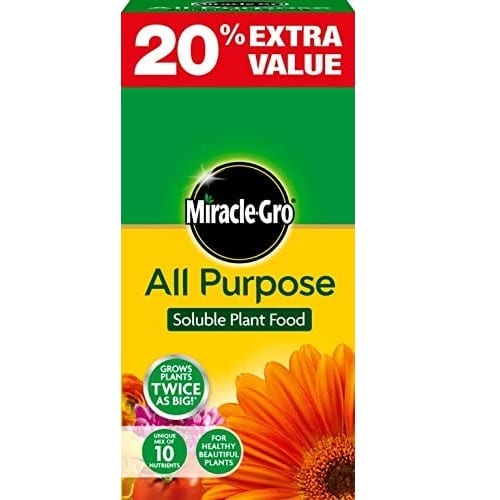 This guide to growing Dianthus is part of the popular “Our Plants” section of this site. Discover more of the plants we are currently growing in our gardens. Start here

Discover how you can easily grow long trailing petunias from hanging baskets, tubs and containers. Make a statement in your garden with our helpful guide. Start here